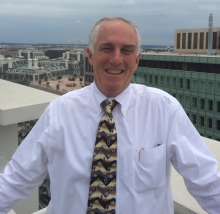 Dr. Mike Kuperberg became the Executive Director for the US Research Program (USGCRP) in July 2015. Mike is on detail from the Department of Energy’s (DOE) Office of Science where he has managed environmental research programs for the past decade. Most recently, he was DOE’s Principal to USGCRP and has been active in numerous aspects of the USGCRP program. His areas of expertise include environmental toxicology, ecology and carbon cycling with a current focus on Arctic processes.

Prior to his position with the DOE, he spent approximately 17 years on the research faculty of Florida State University, most recently as Associate Director for Environmental Programs within the Center for Biomedical and Toxicological Research (CBTR). He received his Ph.D. in Environmental Toxicology from Florida A&M University in 1999. His doctoral dissertation topic was "Neural mechanisms of organophosphate pesticide (chlorpyrifos)-induced alterations in body temperature." He received his M.S. in Biology from Florida State University in 1986. His M.S. thesis topic was "Response of the marine macrophyte (Thalassia testudinum) to herbivory." Prior to his position at the CBTR, Mike was a Biological Scientist for the Center for Aquatic Research and Resource Management (CARRMA) at Florida State University. At the CARRMA, he was responsible for organizing and carrying out manipulative experiments and field sampling programs in coastal and aquatic systems throughout northwest Florida.

At DOE since 2003, Mike has been both a program manager and acting Division Director for basic science programs that support the Department of Energy’s missions in climate and environmental stewardship. Most recently he has been Program Manager for Terrestrial Science, DOE’s Principal to the U.S. Global Change Research Program (USGCRP) and DOE’s staff representative to the Interagency Arctic Research Policy Committee (IARPC). He led the U.S. Government reviews of the International Panel on (IPCC) fifth assessment report from Working Group 1 and has been a member of the US review team for all of the other IPCC Working Group products. Within the Arctic Council’s Arctic Monitoring and Assessment Program, Mike is the US Head of Delegation, and co-chairs the Methane Expert Group and the new Actions for a Changing Climate (AACA) project.