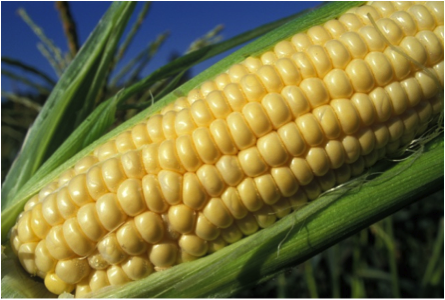 A new study by scientists at Stanford and Purdue University projects that corn prices in the United States will become much more volatile in the near term because of more frequent severe heat conditions expected to result from human-caused . The study also concludes that corn price volatility is more sensitive to near-term climate change than other commonly-cited factors such as energy markets or policy choices. Volatility in price for commodities like corn can translate to fluctuating prices on store shelves.

American corn farmers know from experience that weather events like flooding, , or extreme heat can cause crop yields to vary from year to year and affect the price of products containing corn for consumers.  At the same time, policies that set minimum levels of corn-based biofuels for the national fuel supply also impact prices because they create additional demand for corn.  But science also tells us that climate change is upping the odds for more frequent and events in many regions of the United States adding another layer of complexity to the corn-price equation.

The new study, published in the journal Nature Climate, integrates historical data from each of these areas agriculture, energy, economics, and weatherwith models of future markets and climate scenarios to determine the effect of climate-change-induced heat extremes on price volatility for corn. The authors conclude that climate change impacts pose a particular for corn cropswhich are by nature very heat-sensitiveand  that prices will swing much more wildly from year to year as a result of climate change than as a result of other factorseven assuming relatively modest levels of over the next few decades.  The authors also find that policies requiring the use of corn for the production of biofuels can further amplify price volatility. In years when corn yields are already low, for example, such policies further diminish the amount of corn that can be directed toward consumers, thus driving up prices.

The study highlights the close relationship between American agriculture and climate change that has been investigated in other scientific documents such as the U.S. Research Program's 2009 report Global Climate Change Impacts in the United States, which warns that climate-change-related heavy downpours and droughts are likely to reduce crop yields. The study also concludes that while some crops show positive responses to small increases in atmospheric carbon dioxide (CO2) and temperature, large increases often negatively affect growth and yields.

Corn grows in almost every state and is very responsive to changes in climate, said Jerry Hatfield, Director of the U.S. Department of Agriculture (USDA) National Laboratory for Agriculture and the Environment, in a recent statement. As the temperature gets warmer, corn reproduction and grain development are going to be decreased, everything else equal.

Exposure to extreme temperature events during the critical pollination phase can be particularly detrimental to corn yields because pollen doesnt survive well in extremely hot conditions. Temperatures above 95F, for example, will reduce the number of pollen grains that are able to complete fertilization, decreasing the number of kernels per ear of corn. Some producers are already taking steps to cope with these impacts, such as planting crops earlier to avoid having pollination occur on the hottest days, or switching to different crops altogether.

The new study on price volatility is an important reminder that as the frequency and severity of extreme weather events increases due to climate change, farmers may feel the effects on the ground, and citizens may feel them in their wallets.

Learn more about corn in the National economy here: http://www.ers.usda.gov/Briefing/Corn/background.htm