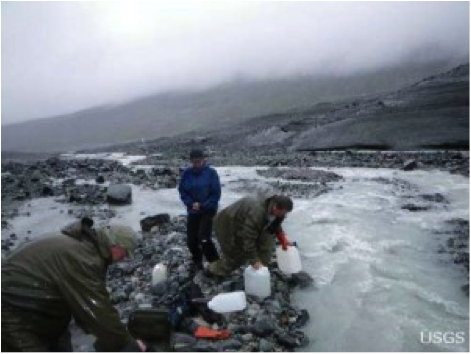 A new study by USGS scientists and university researchers reveals that a substantial amount of organic carbon on Alaskan glaciers comes from atmospheric deposition of fossil fuel emissions. Prior research suggested that the primary source was ancient soil, plants and other organic materials from forests and peat lands that were over run by glaciers thousands of years ago.

While ancient organic plant material is still a potential source of some glacial organic carbon, the new study indicates that human-createdor anthropogenicsources are major contributors.

The results, published in the journal Nature Geoscience, build upon previous USGS studies that found organic carbon in the Yukon River and  determined that its source was glacial meltwater. With the new study, USGS scientists and their university partners traced organic carbon further upstream tounderst and how it arrives at glaciers in the first place. To do this, they analyzed the chemical composition of dissolved organic matter in glacial surface water, snow, and meltwater from coastal areas of Alaska and looked for specific compounds that are consistent with different sources.

Analysis revealed arelative absence of compounds associated with plants and the presence of several compounds in forms consistent with human-made origins, including combustion products that are found in anthropogenic fossil-fuel emissions, such as

While fossil fuels themselves are ancient, deriving from plants and organisms that lived millions of years ago, fossil fuelburning is a relatively modern practice. When fossil fuels are burned, carbon is emitted into the atmosphere, making it available for deposition on surfaces such as glaciers. The studys findings suggest that a large portion of organic carbon found on glaciers comes from such atmospheric deposition as a result of human activity.

Glacial carbon deposits matter because they reduce the amount of sunlight reflected into the atmosphere and because their dark particles absorb heat from the sun, causing glaciers to melt faster and contribute to sea-level rise.

Glacial melt also transports compounds locked up in glaciers into rivers and streams, where they serveas a fundamental food source for microbes and other organisms at the bottom of the aquatic food web. The new studys conclusion that most glacial carbon derives from human activity raises new questions about whetherand how this anthropogenically derived carbon may be influencing aquatic ecosystems.