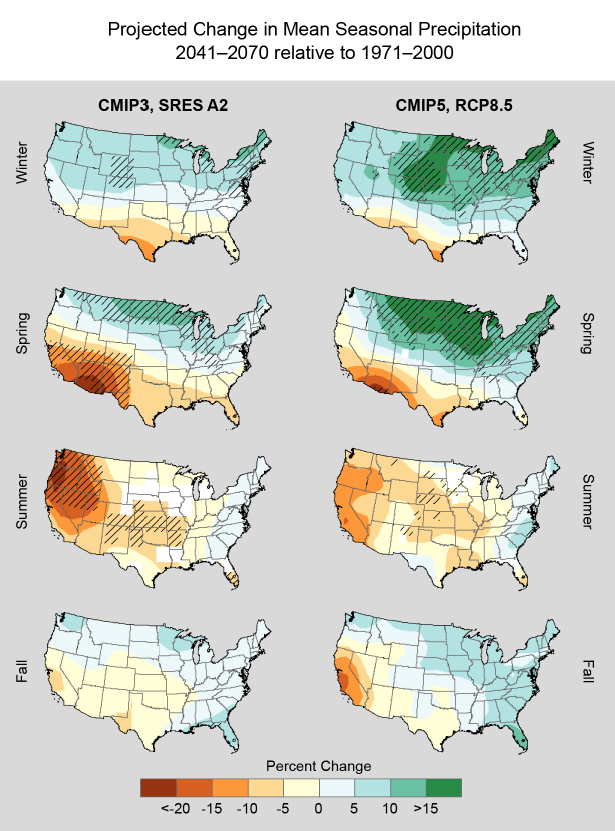 The National Oceanic and Atmospheric Administration (NOAA) recently released two reports that provide detailed comparisons of phases 3 and 5 of the Coupled Model Intercomparison Project (CMIP3 and CMIP5) for the United States. Understanding the strengths of these simulations and the differences among models is important for sustained assessment efforts and these two reports - one from NOAA’s Climate Program Office (CPO) and the other from NOAA’s National Centers for Environmental Information (NCEI) - also reaffirm the findings of the Third National Climate Assessment (NCA3). Taken together, these reports provide important context for the CMIP scenarios used in NCA3 and future National Climate Assessments by building upon past projections put together in a 2013 NOAA Technical Report entitled “Regional Climate Trends and Scenarios for the U.S. National Climate Assessment”.  Additionally, these two reviews will inform CMIP6, which is in the initial design phase. The upcoming Fourth National Climate Assessment will use IPCC representative concentration pathways (RCPs) in addition to CMIP5 products.

The CPO report, entitled “Regional Climate Processes and Projections for North America: CMIP3/CMIP5 Differences”, found that overall CMIP5 had slightly better performance for nearly all climatological variables compared to CMIP3. The main improvements in CMIP5 are a larger number of participating modeling centers, higher model resolution, more ensemble members for each model, and a more complete representation of Earth system processes throughout the models. Similar to CMIP3 models, CMIP5 projects that moderate to extreme precipitation events will increase 20-30 percent over the US, particularly in the winter. However, CMIP5 does sometimes underestimate the frequency of heavy and daily precipitation events, especially in the Southeast. Between the two models, there are some differences in the decreases in extra-tropical storm track activity and in the boundary between winter wetting and drying in the western US. In general, the CMIP5 models do a better job representing the El Niño-Southern Oscillation (ENSO) and the teleconnection patterns in temperature and precipitation across the US.

The NCEI report, entitled “Regional Surface Climate Conditions in CMIP3 and CMIP5 for the United States: Differences, Similarities, and Implications for the U.S. National Climate Assessment”, compared the simulations of historical and future US climate produced by CMIP3 versus CMIP5 and their underlying scenarios and found that the differences between the two were generally small, both in magnitude and in spatial distribution. Because NCA3 utilized mostly CMIP3 simulations to inform many of its findings, this report further validates the conclusions of NCA3. Both models illustrate that, for the moderate and high emission scenarios, temperatures will rise well beyond historical warming and that climate extremes like maximum temperatures will also increase. The small differences that do occur across the different scenarios are probably because CMIP5 scenarios cover a larger range of potential future greenhouse gas concentrations, and, in turn, CMIP5 simulations provide a wider spectrum of climate outcomes.