Is A Sleeping Climate Giant Stirring in the Arctic? 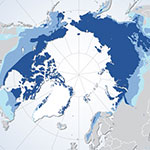 Featured by NASA, a member of the U.S. Global Change Research Program

NASA's Carbon in Arctic Reservoirs Vulnerability Experiment (CARVE) is probing deep into the frozen lands above the Arctic Circle in Alaska to measure emissions of the greenhouse gases carbon dioxide and methane from thawing permafrost signals that may hold a key to Earth's climate future.

NASA’s Earth Ventures program, CARVE, aims to expand understanding of how the Arctic’s water and carbon cycles are linked to climate, as well as what effects fires and thawing permafrost are having on Arctic carbon emissions. CARVE is testing hypotheses that Arctic carbon reservoirs are vulnerable to climate warming, while delivering the first direct measurements and detailed regional maps of Arctic carbon dioxide and methane sources and demonstrating new remote sensing and modeling capabilities. About two dozen scientists from 12 institutions are participating.

“The Arctic is warming dramatically – two to three times faster than mid-latitude regions – yet we lack sustained observations and accurate climate models to know with confidence how the balance of carbon among living things will respond to climate change and related phenomena in the 21st century,” said NASA research scientist Charles Miller.

Ultimately, NASA scientists hope their observations will indicate whether an irreversible permafrost tipping point may be near at hand. While scientists don’t yet believe the Arctic has reached that tipping point, no one knows for sure. “We hope CARVE may be able to find that ‘smoking gun,’ if one exists,” Miller said. Read the full article here.