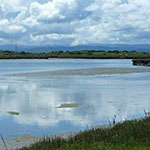 Featured by USGS, a member of the U.S. Global Change Research Program

According to a new U.S. Geological Survey report, San Francisco Bay - which has already lost the majority of its marsh habitat since the 19th Century - could lose even more marshes by the year 2100, due to sea level rise.

Using a new computer model, the scientists found that 95 percent (4,798 acres) of these 12 marshes will be inundated by 2100 under a four-foot sea-level rise scenario — losing their vegetation and being converted into tidal mudflat habitats.