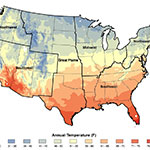 The United States will be a much hotter place, precipitation patterns will shift, and climate extremes will increase by the end of the 21st century, according to reports released in January 2013 by the National Oceanic and Atmospheric Administration (NOAA) in support of the National Climate Assessment (NCA). More recently, the U.S. Global Change Research Program (USGCRP) summarized the January reports into 2-page summaries for each region.

"The historical climate conditions are meant to provide a perspective on what has been happening in each region, and what types of extreme events have been noteworthy, to provide a context for assessing future impacts," said lead author Dr. Kenneth E. Kunkel of NOAA’s Cooperative Institute for Climate and Satellites-Asheville, North Carolina (CICS-NC).

By region, the summaries focus on changes in temperature and precipitation, as well as looking at additional climate features, such as heat waves and extreme precipitation.

Many notable characteristics are emphasized in the scenarios. For instance, the country is generally seeing hotter temperatures, but the Southeast U.S. has not experienced significant warming.

While providing an overview of what has already happened nationwide, the summaries also look to the future of climate change.

Future projections (there are two for each region) explore possible outcomes based upon high- and low-emissions scenarios put forward by the Intergovernmental Panel on Climate Change.

"Readers may find it interesting to see the potential impacts of the two different emissions scenarios on the climate of the region where they live," said co-author Laura E. Stevens of NOAA’s CICS-NC.

These scenarios incorporate many factors, including world population growth, economic development, and worldwide commitment to sustainability.

The “higher emissions” scenario represents a fossil-fuel-intensive future in which concentrations of atmospheric CO2 exceed 800 ppm by the year 2100. The “lower emissions” scenario represents a less fossil-fuel-intensive future in which atmospheric CO2 concentrations level off at around 550 ppm by 2100.

In each model simulation, the potential nationwide warming is unequivocal and large compared to past temperatures. According to simulations, heat spells are expected to become more frequent, with an increasing number of days over 95°F days , especially in south-central and southwest areas.

Additionally, average annual precipitation will generally increase in the north and decrease in the Southwest U.S.

The authors of these reports hope their findings benefit decision-makers and communities seeking to develop climate change adaptation plans. Find out how climate change may impact your region by clicking on the links below:

The map above shows the average (1981-2010) annual precipitation (inches) for the contiguous United States. Based on a new gridded version of COOP data from the National Climatic Data Center, the CDDv2 data set (R. Vose, personal communication, July 27, 2012).

Article written by Tara Failey, a current MPH student in Environmental Health Science and Policy at The George Washington University.