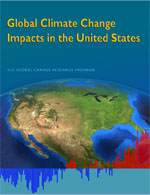 Climate change is already having visible impacts in the United States, and the choices we make now will determine the severity of its impacts in the future, according to a new and authoritative federal study assessing the current and anticipated domestic impacts of climate change.
The report, Global Climate Change Impacts in the United States, compiles years of scientific research and takes into account new data not available during the preparation of previous large national and global assessments. It was produced by a consortium of experts from 13 U.S. government science agencies and from several major universities and research institutes. With its production and review spanning Republican and Democratic administrations, it offers a valuable, objective scientific consensus on how climate change is affectingand may further affectthe United States.
This new report integrates the most up-to-date scientific findings into a comprehensive picture of the ongoing as well as expected future impacts of heat-trapping pollution on the climate experienced by Americans, region by region and sector by sector, said John P. Holdren, Assistant to the President for Science and Technology and director of the White House Office of Science and Technology Policy. It tells us why remedial action is needed sooner rather than later, as well as showing why that action must include both global emissions reductions to reduce the extent of climate change and local adaptation measures to reduce the damage from the changes that are no longer avoidable.