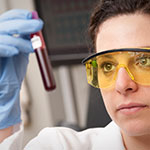 Featured by NIEHS, a member of the U.S. Research Program

What are the potential effects of global on human health? This is a question that a growing number of federally funded studies seek to answer. A new analysis recently published in the journal, Environmental Health Perspectives, looks at the National Institutes of Health (NIH) research portfolio on climate change and human health.

Climate change is affecting human health through environmental consequences, such as sea-level rise, changes in precipitation, heat waves, changes in intensity of hurricanes and storms, and degraded air quality, according to the World Health Organization and the Intergovernmental Panel on Climate Change.

More specifically, climate change is expected to intensify and heat mortality. It could worsen infectious diseases, like malaria and cholera; it could also aggravate chronic illnesses, including cancer and cardiovascular disease. Other secondary human health impacts may include population migration or human conflict arising from food or water scarcity brought on or exacerbated by climate change.

To better understand how well the NIH is studying these impacts and addressing knowledge gaps, a team of NIH scientists and grant managers analyzed the 2008 NIH research portfolio. Their goal: To enumerate the studies seeking to investigate the complex relationships among ecosystems, and climate change and domestic and global health. 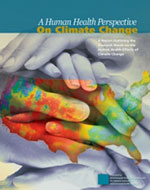 The article above was written by Tara Failey who is currently an MPH student in Environmental Health Science and Policy at The George Washington University.