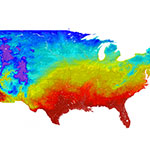 Featured by NASA, a member of the U.S. Global Change Research Program

Global models of the climate system are now the foundation for many important climate studies, but they typically show climate changes at very large geographic scales on the order of 100 to 250 kilometers. Using previously published large-scale climate model projections, a team of scientists from NASA has recently released monthly climate projections for the United States at a scale of one half mile (800 meters), or approximately the size of a neighborhood.

These new high-resolution climate projections provide a view of future U.S. temperature and precipitation patterns based on four different greenhouse gas emissions scenarios, spanning the period from 1950 to 2099. The scenarios are derived from the best physical models of the climate system available, provide a projection of future climate conditions given certain greenhouse gas emissions scenarios, and account for the effects of local topography on temperature and precipitation patterns.

The new climate projections will help make it easier for resource managers and city planners to quantify anticipated climate change impacts on a wide range of conditions and resources important to local communities, such as water supplies and winter snow packs, public health and the spread of insect-borne diseases, flood risk and potential impacts to critical urban infrastructure, wildfire frequency and severity, agricultural production, and wildlife and biodiversity.

Researchers anticipate these new images will serve as an important resource for regional analyses of climate change that are being conducted by scientists at a variety of institutions, including the U.S. Dept. of Interior Climate Science Centers and the National Park Service.

"Climate changes threaten the integrity of parks throughout the National Parks system, and park mangers desperately need data at management-relevant scales to inform decisions,” said John Gross and William Monahan, ecologists with the National Park Service who are leading studies of climate change in our national parks. “These high-resolution assessments are the basis for implementing effective climate adaptation, at management-relevant scales.”