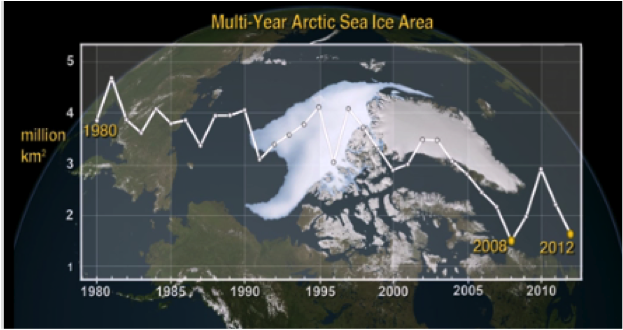 A new NASA study shows that the average thickness of sea ice in the Arctic is on the decline. In fact, oldest and thickest Arctic sea ice is disappearing faster than younger, thinner ice that surrounds it creating an overall thinning effect and more areas of open, ice-free water during the summer months.

Older, thicker ice is the mainstay of the Arctic ice cover and historically would be the one most likely to survive the summer melt, said Joey Comiso, a senior scientist at NASA Goddard Space Flight Center and author of the study. Unless a sustained cooling in the Arctic happens in the near future, the Arctic Ocean will soon have very little or no sea ice-cover in the summer.

Typically, old ice called multi-year sea ice when it lasts through at least two summersis thick enough to survive multiple summertime melt seasons. Newer ice, on the other hand, is thinner and can melt seasonally, just as quickly as it was formed. The rapid disappearance of older ice means areas of the Arctic Ocean are increasingly comprised of ice-free, open water during the summer season, which has implications for global climate as well as regional communities and ecosystems.

To measure ice cover, scientists use satellite sensors that detect microwaves emitted by the ice surface, then turn those signals into digital images. As it turns out, younger ice is saltier than older icea difference that results in distinctive microwave emissions that  allow satellite sensors to distinguish between old and young ice. Scientists use two primary measures to describe the amount of polar sea-ice cover: sea ice extent the size of the ice-covered region, including some ice-free gaps and sea ice area, which is the total area of the ice itself, not including gaps.

In 2008, the extent of multi-year Arctic sea ice hit a record minimum, reaching just 55 percent of its average extent since satellite measurements began in the late 1970s. So far, 2012 shows the second lowest multi-year ice extent ever.

Many factors may be contributing to this phenomenon, including rising surface temperatures in the Arctic generally, which result in a shorter ice-forming season and, thus, less time for sea ice to build the thickness required to survive multiple summers.

Changes in extent or area of sea ice generally can have important impacts in the Arctic and beyond. Most importantly, by lowering the region's reflectivity and increasing the marine absorption of solar energy, loss of sea ice accelerates . Moreover, sea-ice loss triggers a mechanism whereby ice loss leads to more sunlight absorbed, more rapid warming, and, in turn, even more ice loss. This feedback mechanism is one reason why the Arctic has been warming approximately twice as fast as the planet as a whole.

At the same time, reduced ice cover has important implications for local communities, ecosystems, and industries that use and depend on Arctic waters. The 2004 Arctic Impacts Assessment, for example, described sea-ice loss as likely to have devastating consequences for polar bears, ice-dependent seals, and local people for whom these animals are a primary food source. The increased amount of open-water that results from sea-ice loss is also opening up new routes and access points for shipping and maritime industries. That presents new opportunities for regional economic activity, but also poses new regional vulnerabilities to the environmental impacts of those activities.

As old ice continues its rapid disappearing act, these impacts will be increasingly felt during the summer months, when more and more areas of water normally protected by multiyear ice cover open up completely.