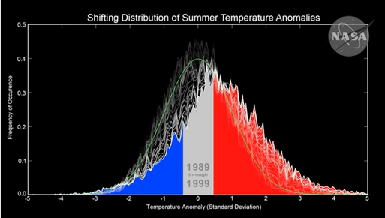 Featured by NASA, a member of the U.S. Research Program

James Hansen and colleagues use the bell curve to how the growing frequency of extreme summer temperatures in the Northern Hemisphere, compared to the 1951 to 1980 base period.

A new statistical analysis by NASA scientists has found that Earth's land areas have become much more likely to experience an extreme summer than they were in the middle of the 20th century. The statistics show that the recent bouts of extremely warm summers, including the intense heat wave afflicting the U.S. Midwest this year, very likely are the consequence of , according to lead author James Hansen of NASA's Goddard Institute for Space Studies (GISS) in New York.

In a statement released in response to the paper, Dr. John Holdren, Director of the White House Office of Science and Technology Policy, said:

While it remains true that no single, event can be proven to have been caused by , this report underscores what climate scientists have been saying for decadesclimate change makes high temperatures more likely. This work, which finds that extremely hot summers are over 10 times more common than they used to be, reinforces many other lines of evidence showing that climate change is occurring and that it is harmful. Read more