2014 Confirmed as Hottest Year on Record 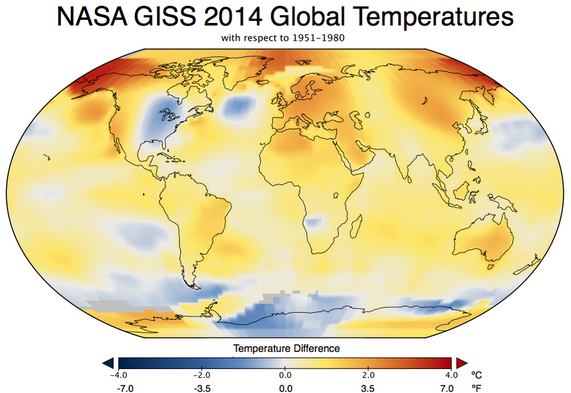 2014 ranks as Earth’s warmest since record keeping began in 1880, according to independent analyses by scientists at NASA and the National Oceanic and Atmospheric Administration (NOAA).

The analyses, released today, take into account surface temperatures over both land and sea. They further confirm the findings of the Japan Meteorological Agency, which announced 2014 as the warmest year on record on January 6. NASA, NOAA, and the Japan Meteorological Agency constitute three of the four major government agencies that track global temperature trends; the fourth, the United Kingdom’s Met Office Hadley Centre, has yet to report.

“This is the latest in a series of warm years, in a series of warm decades. While the ranking of individual years can be affected by chaotic weather patterns, the long-term trends are attributable to drivers of climate change that right now are dominated by human emissions of greenhouse gases,” said Gavin Schmidt, Director of NASA’s Goddard Institute for Space Studies (GISS), which led the NASA analysis.

Although the 2014 temperatures carry on Earth’s long-term warming trend, scientists still expect to see year-to-year variability in average global temperatures as a result of phenomena such as El Niño and La Niña. Temperatures tend to be warmer in El Niño years and cooler in La Niña years.  It is worth noting that 2014’s record warmth occurred during an El Niño-neutral year.