Climate Change Impacts on the United States: The Potential Consequences of Climate Variability and Change [DVD] 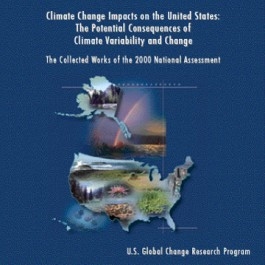 In 1997, the U. S. Global Change Research Program initiated the First National Climate Assessment. This national-level assessment included analyses of the importance of climate variability and change for twenty regions around the United States, for five cross-cutting sectors, and for the United States as a whole. A thirteen-member National Assessment Synthesis Team (NAST) summarized and integrated the findings of the regional and sectoral studies, and drew conclusions about the importance of the consequences of climate change and variability for the United States. Both an Overview report (intended for decision makers and the public) and a Foundation report (intended for experts) were prepared and submitted to the President and Congress in November 2000. This DVD contains background information, the Overview and Foundation reports (both the public review drafts and the final reports), citations, and high-resolution images. It also includes most of the regional and sectoral reports, or links to those reports. In addition, the DVD contains educational resources; back issues (July 1998 through September 2000) of "Acclimations," the newsletter of the National Assessment; and Chapter 6 - Impacts and Adaptation of the 2002 Climate Action Report, the United States' Third National Communication Under the United Nations Framework Convention on Climate Change (UNFCCC) (the chapter is based to a large extent on the results of the First National Climate Assessment).

Other Reports of Potential Interest

Climate Change Impacts on the United States: The Potential Consequences of Climate Variability and Change. Overview.