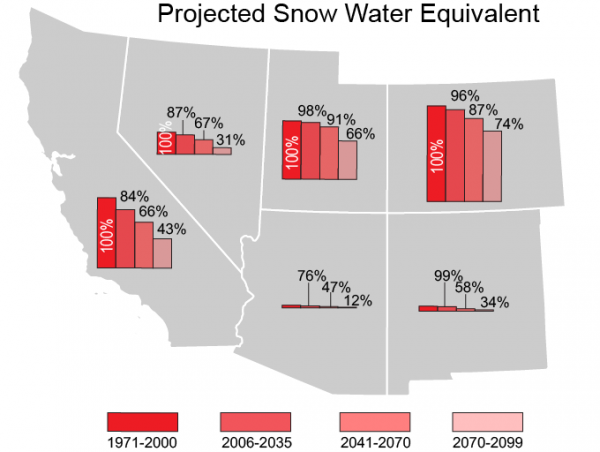 Snow water equivalent (SWE) refers to the amount of water held in a
volume of snow, which depends on the density of the snow and other factors. Figure shows projected snow water equivalent for
the Southwest, as a percentage of 1971-2000, assuming continued increases in global emissions (A2 scenario). The size of bars
is in proportion to the amount of snow each state contributes to the regional total; thus, the bars for Arizona are much
smaller than those for Colorado, which contributes the most to region-wide snowpack. Declines in peak SWE are strongly
correlated with early timing of runoff and decreases in total runoff. For watersheds that depend on snowpack to provide
the majority of the annual runoff, such as in the Sierra Nevada and in the Upper Colorado and Upper Rio
Grande River Basins, lower SWE generally translates to reduced reservoir water storage. (Data from
Scripps Institution of Oceanography).