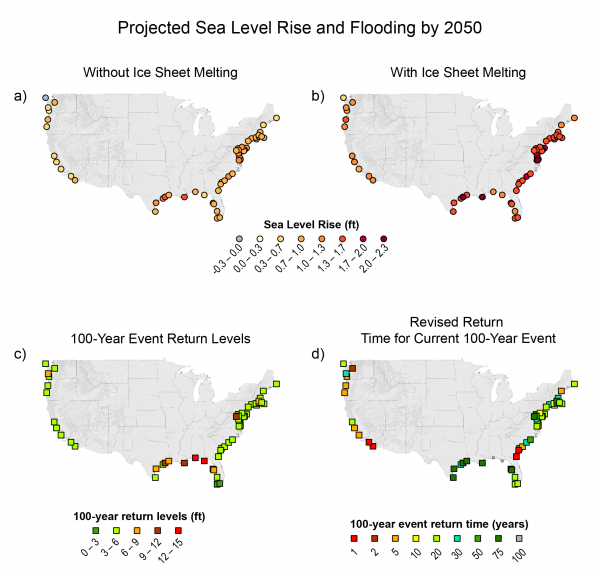 The amount of sea level rise (SLR) by 2050 will vary along different stretches of
the U.S. coastline and under different SLR scenarios, mostly due to land subsidence or uplift
(Ch.2: Our Changing Climate). The
panels show feet of sea level above 1992 levels at different tide gauge stations based on a) an 8
inch SLR and b) a 1.24 foot SLR by 2050. The flood level that has a 1% chance of occurring
in any given year (“return level”) is similarly projected to differ by region as a result of varying
storm surge risk. Panel c) shows return levels for a 1.05 foot SLR above mean high tide by 2050.
Finally, panel d) shows how a 1.05 foot SLR by 2050 could cause the level of flooding that
occurs during today’s 100-year storm to occur more frequently by mid-century, in some regions
as often as once a decade or even annually. (Figure source: replicated Tebaldi et al.
2012 analysis with NCA sea level rise
scenarios for panels a) and
b); data/ensemble SLR projections used for panels c) and d) from Tebaldi et al.
2012; all estimates include the effect of
land subsidence).