Projected Relative Sea Level Rise for the Latitude of Newport, OR 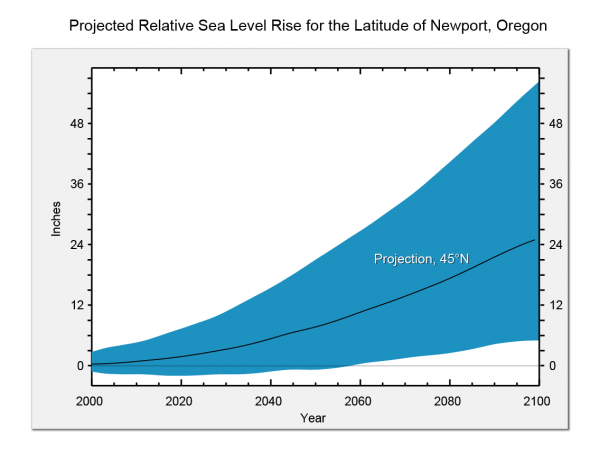 Projected relative sea level rise for the latitude of Newport, Oregon (relative to the year 2000) is based on a broader suite of emissions scenarios (ranging from B1 to A1FI) and a more detailed and regionally-focused calculation than those generally used in this assessment (see Ch. 2: Our Changing Climate). The blue area shows the range of relative sea level rise, and the black line shows the projection, which incorporates global and regional effects of warming oceans, melting land ice, and vertical land movements. Given the difficulty of assigning likelihood to any one possible trajectory of sea level rise at this time, a reasonable risk assessment would consider multiple scenarios within the full range of possible outcomes shown, in conjunction with long- and short-term compounding effects, such as El Niño-related variability and storm surge. (Data from NRC 2012).