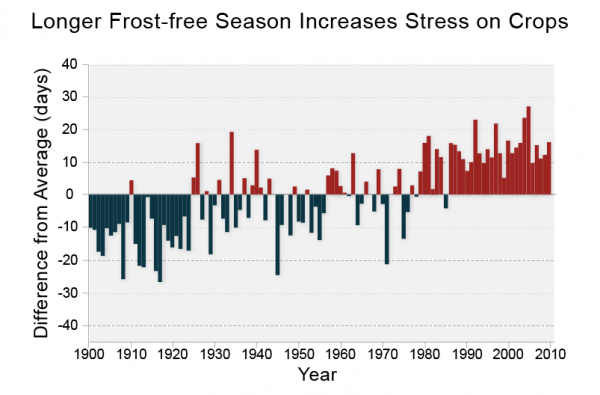 The frost-free season is defined as the period between the last occurrence of 32°F in spring and the first occurrence of 32°F in the subsequent fall. The chart shows significant increases in the number of consecutive frost-free days per year in the past three decades compared to the 1901-2010 average. Increased frost-free season length, especially in already hot and moisture-stressed regions like the Southwest, is projected to lead to further heat stress on plants and increased water demands for crops. Higher temperatures and more frost-free days during winter can lead to early bud burst or bloom of some perennial plants, resulting in frost damage when cold conditions occur in late spring (see Ch. 6: Agriculture); in addition, with higher winter temperatures, some agricultural pests can persist year-round, and new pests and diseases may become established. (Figure source: Hoerling et al. 2013).