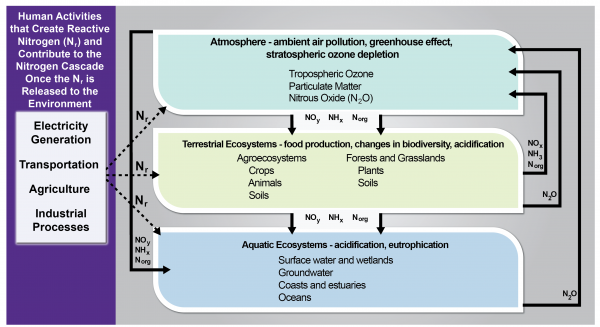 Once created, a molecule of reactive nitrogen has a cascading impact on people and ecosystems as it contributes to a number of environmental issues. Molecular terms represent oxidized forms of nitrogen primarily from fossil fuel combustion (such as nitrogen oxides, NOx), reduced forms of nitrogen primarily from agriculture (such as ammonia, NH3), and organic forms of nitrogen (Norg) from various processes. NOy is all nitrogen-containing atmospheric gases that have both nitrogen and oxygen, other than nitrous oxide (N2O). NHx is the sum of ammonia (NH3) and ammonium (NH4). (Figure source: adapted from EPA 2011; Galloway et al. 2003; with input from USDA. USDA contributors were Adam Chambers and Margaret Walsh).