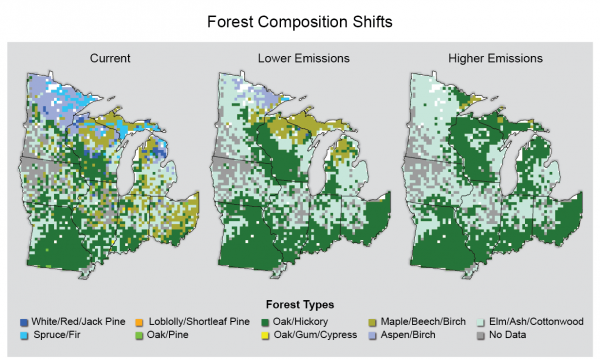 As climate changes, species can often adapt by changing their ranges. Maps show current and projected future
distribution of habitats for forest types in the Midwest under two emissions scenarios, a lower scenario that assumes
reductions in heat-trapping gas emissions (B1), and a very high scenario that assumes continued increases in emissions (A1FI).
Habitats for white/red/jack pine, maple/beech/birch, spruce/fir, and aspen/birch forests are projected to greatly decline from
the northern forests, especially under higher emissions scenarios, while various oak forest types are projected to
expand. While some forest types may not remain
dominant, they will still be present in reduced quantities. Therefore, it is more appropriate to assess changes on an
individual species basis, since all species within a forest type will not exhibit equal responses to climate change. (Figure source: Prasad et al. 2007).