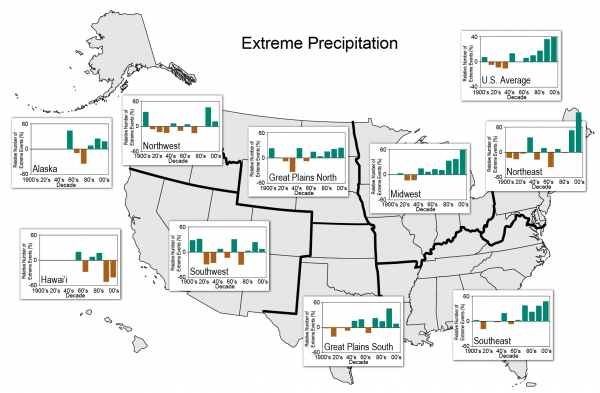 Heavy downpours are increasing nationally, with especially large increases in the Midwest and Northeast. Despite considerable decadal-scale natural variability, indices such as this one based on 2-day precipitation totals exceeding a threshold for a 1-in-5-year occurrence exhibit a greater than normal occurrence of extreme events since 1991 in all U.S. regions except Alaska and Hawai ‘ i. Each bar represents that decade’s average, while the far right bar in each graph represents the average for the 12-year period of 2001-2012. Analysis is based on 726 long-term, quality-controlled station records. This figure is a regional expansion of the national index in Figure 2.16 of Chapter 2. (Figure source: updated from Kunkel et al. 2013).