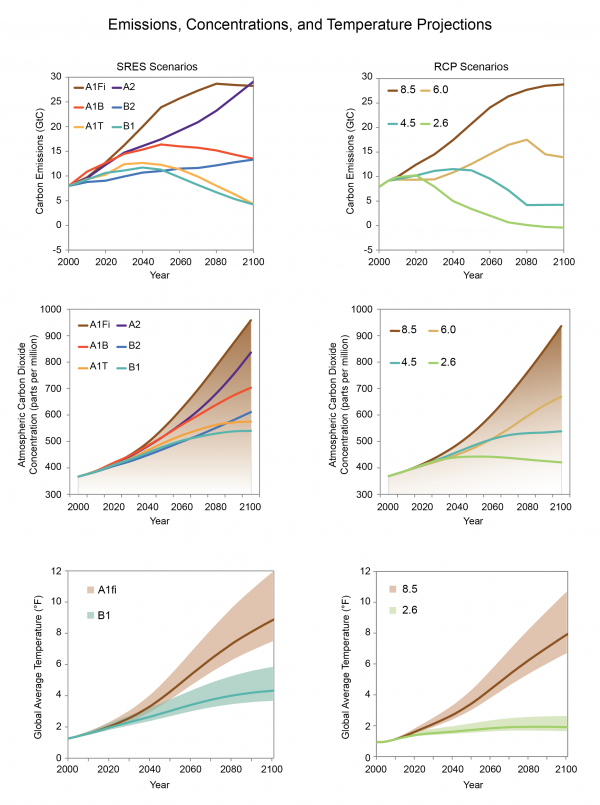 Two families of scenarios are commonly used for future climate projections: the 2000 Special Report on Emission Scenarios (SRES, left) and the 2010 Representative Concentration Pathways (RCP, right). The SRES scenarios are named by family (A1, A2, B1, and B2), where each family is designed around a set of consistent assumptions: for example, a world that is more integrated or more divided. In contrast, the RCP scenarios are simply numbered according to the change in radiative forcing (from +2.6 to +8.5 watts per square meter) that results by 2100. This figure compares SRES and RCP annual carbon emissions (top), carbon dioxide equivalent levels in the atmosphere (middle), and temperature change that would result from the central estimate (lines) and the likely range (shaded areas) of climate sensitivity (bottom). At the top end of the range, the older SRES scenarios are slightly higher. Comparing carbon dioxide concentrations and global temperature change between the SRES and RCP scenarios, SRES A1fI is similar to RCP 8.5; SRES A1B to RCP 6.0 and SRES B1 to RCP 4.5. The RCP 2.6 scenario is much lower than any SRES scenario because it includes the option of using policies to achieve net negative carbon dioxide emissions before end of century, while SRES scenarios do not. (Data from CMIP3 and CMIP5).