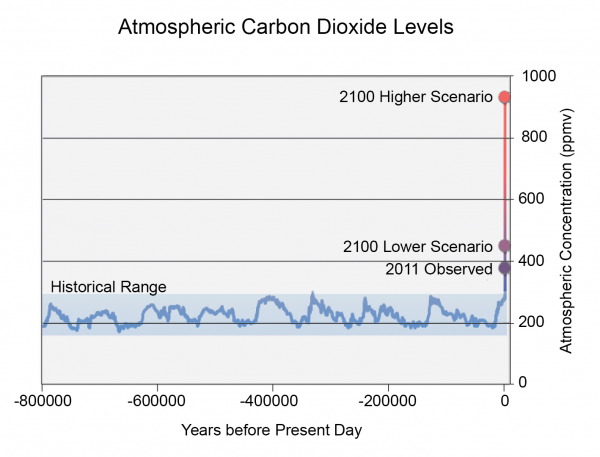 Air bubbles trapped in an Antarctic ice core extending back 800,000 years document the atmosphere’s changing carbon dioxide concentration. Over long periods, natural factors have caused atmospheric CO 2 concentrations to vary between about 170 to 300 parts per million (ppm). As a result of human activities since the Industrial Revolution, CO 2 levels have increased to 400 ppm, higher than any time in at least the last one million years. By 2100, additional emissions from human activities are projected to increase CO 2 levels to 420 ppm under a very low scenario, which would require immediate and sharp emissions reductions (RCP 2.6), and 935 ppm under a higher scenario, which assumes continued increases in emissions (RCP 8.5). This figure shows the historical composite CO 2 record based on measurements from the EPICA (European Project for Ice Coring in Antarctica) Dome C and Dronning Maud Land sites and from the Vostok station.