Heat waves are occurring more often than they used to in major cities across the United States, from an average of two heat waves per year during the 1960s to more than six per year during the 2010s. The average
heat wave A period of abnormally hot weather lasting days to weeks.
season across 50 major cities is 47 days longer than it was in the 1960s. Of the 50 metropolitan areas in this
indicator An observation or calculation that allows scientists, analysts, decision makers, and others to track environmental trends, understand key factors that influence the environment, and identify effects on ecosystems and society.
, 46 experienced a statistically significant increase in heat wave frequency between the 1960s and 2010s. The increase in the length of the heat wave season was significant in 44 locations. 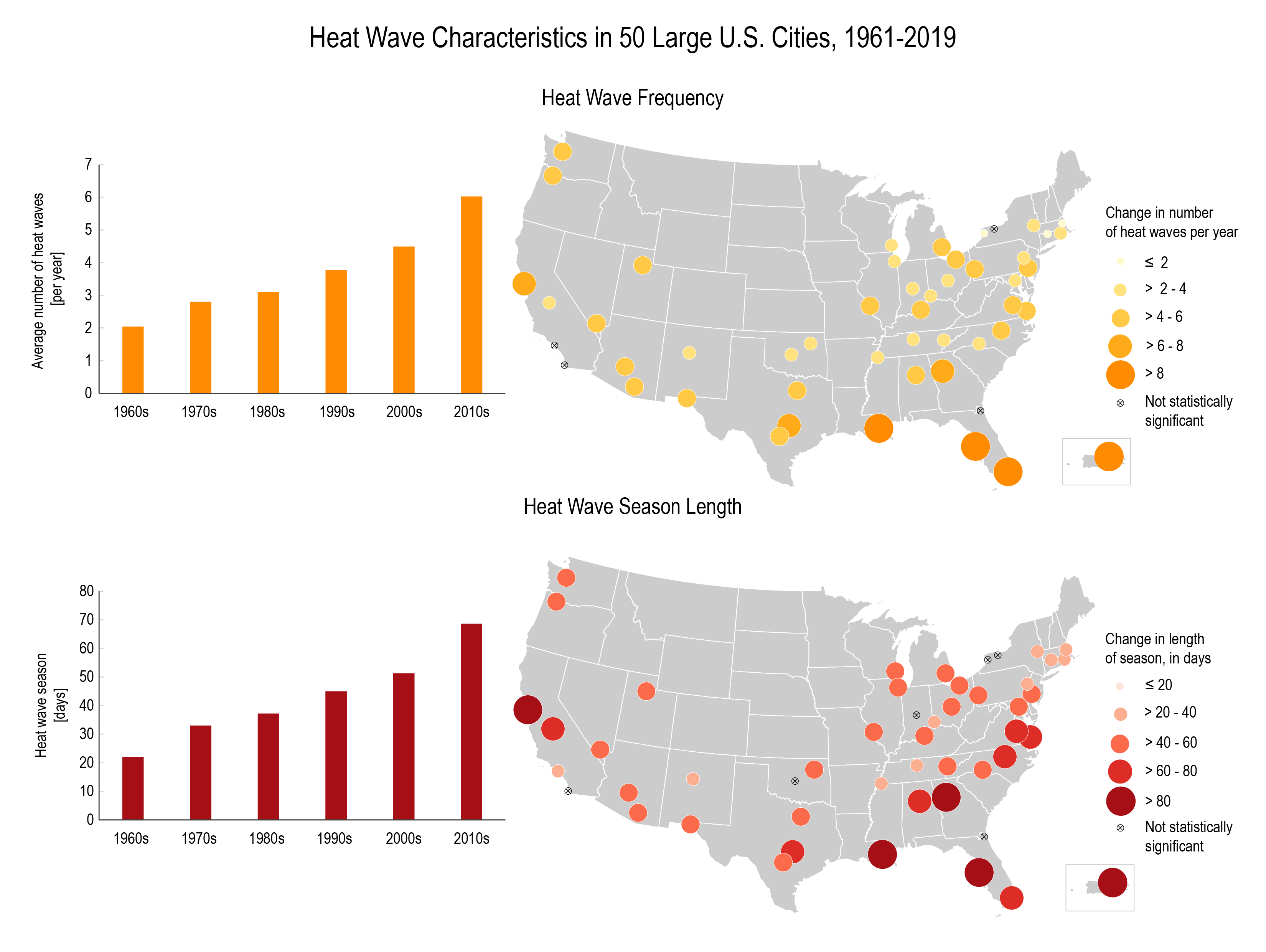 View Metadata
These bar graphs and maps show changes in the number of heat waves per year (frequency) and the number of days between the first and last heat wave of the year (season length). These data were analyzed from 1961 to 2019 for 50 large U.S. metropolitan areas. The graphs show averages across all 50 metropolitan areas by decade. The size/color of each circle in the maps indicates the rate of change per decade. Hatching represents cities where the trend is not statistically significant.

Unusually hot days and multi-day heat waves are a natural part of day-to-day variation in weather. As the Earth’s climate warms, however, hotter-than-usual days and nights are becoming more common and heat waves are expected to become more frequent and intense ( Climate Science Special Report Executive Summary ). Increases in these extreme heat events can lead to more heat-related illnesses and deaths, especially if people and communities are not prepared and do not take steps to adapt.

Large urban areas already face challenges related to heat. Surface air temperatures are often higher in urban areas than in surrounding rural areas for a number of reasons, including the concentrated release of heat from buildings, vehicles, and industry. This
urban heat island effect The tendency for higher air temperatures to persist in urban areas as a result of heat absorbed and emitted by buildings and asphalt, tending to make cities warmer than the surrounding countryside.
is expected to strengthen in the future as the structure, spatial extent, and population density of urban areas change and grow ( Climate Science Special Report, Chapter 10 ).

This indicator examines trends over time in two characteristics of heat waves in the United States: Heat waves can be defined in many ways. For consistency across the country, this indicator defines a heat wave as a period of two or more consecutive days where the daily minimum apparent temperature (actual temperature adjusted for humidity) in a particular city exceeds the 85th percentile of historical July and August temperatures (1981–2010) for that city. This approach is useful for several reasons:

The most serious health impacts of a heat wave are often associated with high temperatures at night, which is when the daily minimum usually occurs. If the air temperature stays too warm at night, the body faces extra strain as the heart pumps harder to try to regulate body temperature.

Adjusting for humidity is important because when humidity is high, water does not evaporate as easily, so it is harder for the human body to cool off by sweating. That is why health warnings about extreme heat are often based on the “heat index,” which combines temperature and humidity.

By using the 85th percentile for each individual city, this indicator defines “unusual” in terms of local conditions. A specific temperature like 95°F might be considered unusually hot in one city but perfectly normal in another city. Plus, people in relatively warm regions (such as the Southwest) may be better acclimated and adapted to hot weather.

Data for this indicator are based on temperature and humidity measurements between 1961 and 2019 from long-term weather stations, which are generally located at airports. This indicator focuses on the 50 most populous U.S. metropolitan areas that have available weather data from a consistent location. The year 1961 was chosen as the starting point because most major cities have collected consistent data since at least that time. The methodology for this indicator is based on Habeeb et al. 2015.