Posted
Modeling, Carbon Cycle, Arctic
Long-frozen northern soils known as permafrost contain one of the world’s largest stores of organic carbon. This reservoir is stable while soils are frozen, but as permafrost thaws, decomposition of biomass by microbes produces the heat-trapping gases carbon dioxide and methane, returning soil carbon to the atmosphere where it contributes to climate change. Permafrost carbon stores are expected to be increasingly vulnerable to decomposition as the climate continues to change, leading to a feedback cycle of further warming and permafrost thaw.[1]
Earth system models have recently begun to account for the effects of carbon emissions from gradual, surface-level permafrost thaw in their estimates of future climate change. However, carbon emissions from processes of deeper, abrupt thawing that occur beneath thermokarst lakes—shallow ponds that form in permafrost terrain as ice-rich soils thaw—are not yet accounted for in models. To help address this gap, researchers funded by NASA, NSF, and DOE used model output, supported by USGS-NASA satellite data and field measurements, to investigate the impacts of carbon emissions from thermokarst lakes on future climate change.[2]

By comparing estimates of Arctic-wide permafrost carbon emissions from surface thaw alone with estimates that include abrupt thaw beneath thermokarst lakes, the researchers found that accounting for emissions from abrupt thaw more than doubles previous estimates of warming caused by northern permafrost thaw this century. These findings demonstrate the need to incorporate abrupt permafrost thaw in Earth system models for a more comprehensive understanding of the rate of climate change throughout the 21st century. 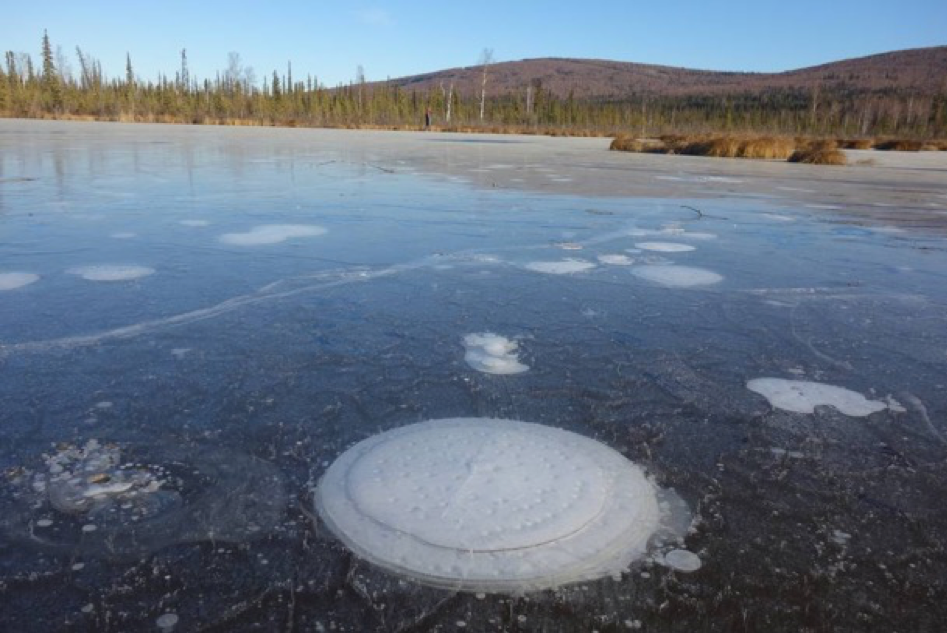 Methane emitted from thawing permafrost below an Arctic thermokarst lake is trapped in bubbles of many different sizes and shapes as the ice grows during the winter. Credit: Katey Walter Anthony/University of Alaska Fairbanks.