Posted
Coasts, Human Health
In the Gulf of Mexico, toxic algal bloom outbreaks (or red tides) occur primarily during the late summer and early fall, and can be harmful to people and ecosystems. One of the most severe red tide outbreaks in a decade hit Florida’s Gulf Coast throughout the summer and early fall of 2018, with widespread adverse impacts that prompted the governor to declare a State of Emergency in mid-August.
In October 2018, a new pilot smartphone-based information resource developed by NASA, NOAA, and state and local partners began alerting users to red tide risks around St. Petersburg and Pinellas County, Florida. The new 24-hour Experimental Red Tide Respiratory Forecast is updated every three hours and allows the public to see which beaches are currently impacted by red tide and which ones may be impacted over the next day. The forecast system uses satellite data to identify and map the spatial extent of algal blooms, as well as water sampling to test for the presence of toxic blooms.
The tool was developed by NOAA's National Centers for Coastal Ocean Science in partnership with the Gulf of Mexico Coastal Ocean Observing System, the Florida Fish and Wildlife Conservation Commission, and Pinellas County Environmental Management, through funding from NASA. It builds on NOAA's Harmful Algal Bloom Forecast System and the Near Real-Time Integrated Red Tide Information System from the University of South Florida, both of which use NASA satellite data from the Terra and Aqua spacecrafts. 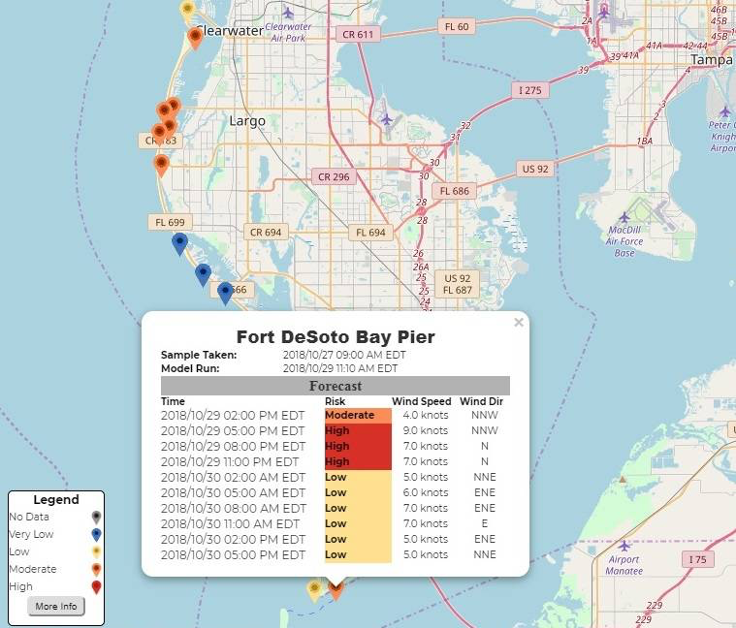