Climate indicators show trends over time in important aspects of our environment, such as greenhouse gas levels in the atmosphere and the start of spring each year. Indicators are based on long-term, consistently collected data and can be used to assess risks and vulnerabilities from a changing climate and to inform response actions. IndIWG developed an interagency web platform for USGCRP to highlight federally supported climate-relevant indicators and is continuing to support the development and inclusion of new indicators.

New indicator publication: marine species distribution. As climate change drives ocean warming, populations of some marine species are adapting by shifting northward or to deeper waters that have a more suitable temperature, with implications for U.S. fisheries and consumers. EPA and NOAA partnered in the development of an indicator examining changes in the location of fish, shellfish, and other marine species along U.S. coasts that is now part of EPA’s climate change indicators, the Fourth National Climate Assessment, and the USGCRP Indicator Platform. A related peer-reviewed publication on the climate impacts to U.S. marine fisheries was also published in 2020, finding that warming ocean temperatures could lead to annual losses in the range of hundreds of millions of dollars to U.S. commercial fisheries by the end of the century.[1]

Federal workshop on forest-related climate indicators. Indicators of climate impacts for forests such as change in forest structure and composition or disturbance from wildfire and forest insects and diseases can help forest managers understand how climate drives changes in forests and how to manage for these changes over time. IndIWG co-chairs and members of the working group organized and hosted a 3-day workshop with over 30 scientists from the USDA Forest Service and academia to help identify and discuss indicators related to forest disturbances. Follow-up from the workshop includes advancing indicators on forest disturbances including wildfires, insect and disease mortality, drought, flooding, and others.

New science communication overview of indicators. The USDA Forest Service, the EPA, and USGCRP partnered to develop a new communication tool that allows users to explore the story of climate change through federally supported observations. The interactive Story Map features multiple agency indicators, some of which are hosted on USGCRP’s Indicator Platform. The Story Map is also featured in EPA’s main climate change website. 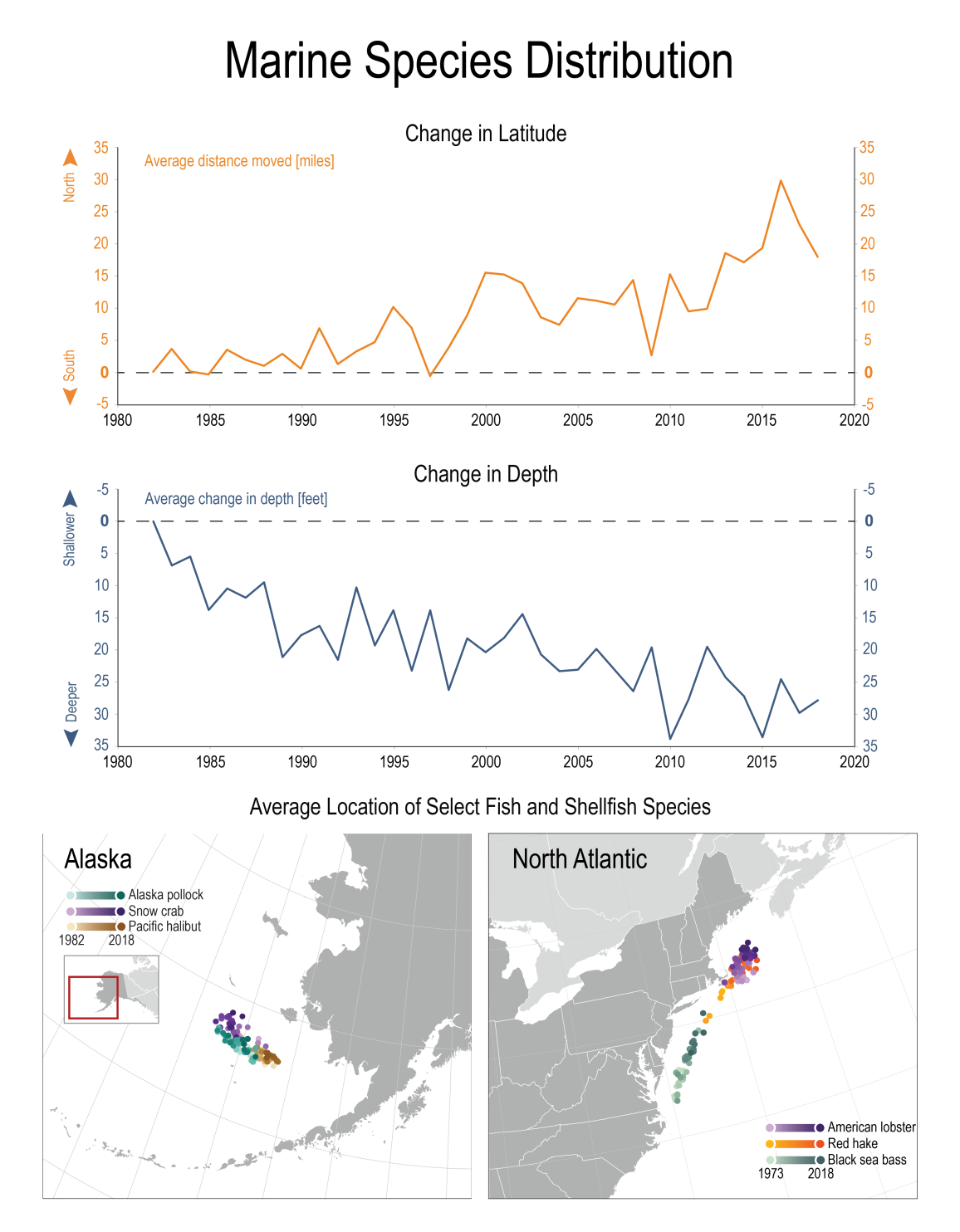 The graphs show the annual change in latitude (orange line; movement in miles) and depth (blue line; depth change in feet) of 140 marine species along the northeastern U.S. coast and in the eastern Bering Sea. Changes in the centers of biomass have been aggregated across all 140 species. The maps show the annual centers of biomass for three species (Alaska pollock, snow crab, and Pacific halibut) in the eastern Bering Sea from 1982 to 2018 (left) and for three species (American lobster, red hake, and black sea bass) along the northeastern U.S. coast from 1973 to 2018 (right). Dots are shaded from light to dark to show change over time. Data sources: NOAA NMFS and Rutgers University.

Tracking the impacts of climate change on agriculture