Researchers are experimentally warming northern peatlands to understand carbon cycling in the climate of the future.

Northern peatlands hold large stocks of organic carbon in their soils that are vulnerable to release into the atmosphere as the carbon dioxide and methane as the climate warms. Emissions of methane, which has about 28 times the warming power of carbon dioxide over a 100-year period, are of particular concern. Prior studies have been limited to the effects of surface-level warming on carbon cycling, and the response of deeper layers of peat to warming—which could contribute significantly to future climate change—is not well understood. To address this gap, a multidisciplinary group of researchers from three DOE Laboratories, the USDA Forest Service, and a number of universities are using a ten-year warming study of a Minnesota black spruce peatland , the Spruce and Peatland Responses Under Changing Environments (SPRUCE) experiment, to investigate the stability of the ancient carbon stocks that lie beneath it.

In 2014, researchers initiated warming of deep peat by as much as 9°C above surrounding temperatures over 13 months—an upper limit on projected temperature increase by 2100 under the most extreme greenhouse gas . Researchers found that while the deeper, 3,000–12,000-year-old carbon stocks under oxygen free, water-saturated conditions did not decompose under higher temperatures, more modern surface carbon associated with living vegetation cycled at a faster rate and resulted in increased methane and carbon dioxide emissions as warming increased (see figure). [1] This surface response associated with more recent carbon stores may have significant consequences for future climate warming.

Operation of the SPRUCE experiment continues under whole-ecosystem warming conditions for several years to measure peatland carbon, water, and and the growth and survival of vegetation and microbial communities, all of which influence carbon storage in peatland soils. These data will inform efforts to model vegetation response under projected levels of . 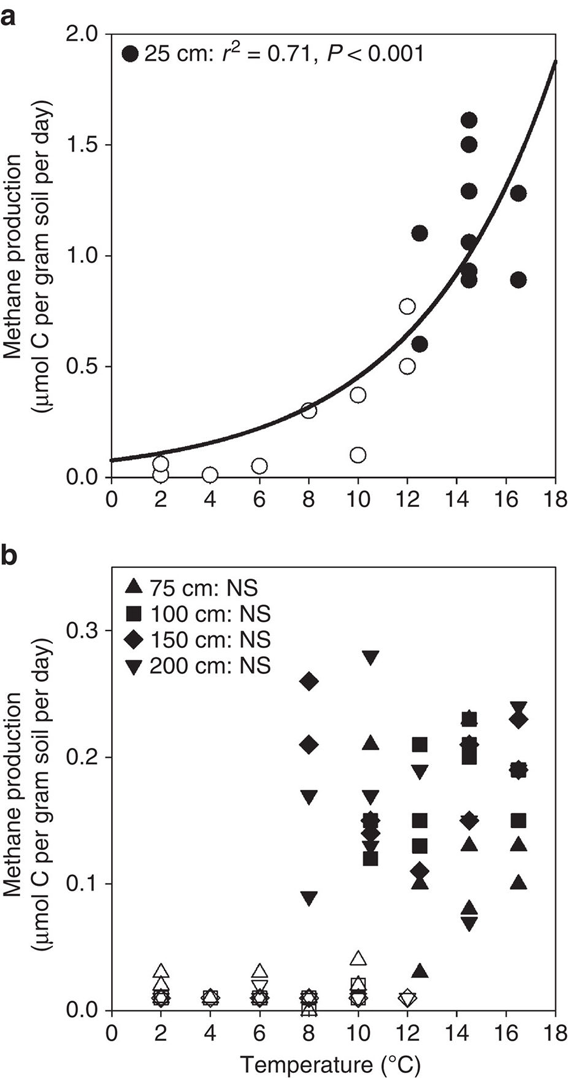 Figure shows how methane production changes with temperature in (a) surface and (b) deep peat samples that were anaerobically (without oxygen) incubated within 1°C of in-situ (field) temperatures after about 4 (closed symbols, September 2014) and 13 (open symbols, June 2015) months of deep peat warming. As shown in (a), in incubations of peat within 1°C of in-situ temperatures, carbon dioxide and methane production in surface peat significantly increased with temperature. In contrast, as shown in (b), no relationship between temperature and methane or carbon dioxide production was observed in incubations of peat from depths deeper than 25 cm, meaning that production neither increased nor decreased as temperatures increased. Dark line indicates significant regression results. NS, not significant. Source: Wilson et al, 2016.