Rapid warming in the Arctic is causing carbon-rich soils known as permafrost, previously frozen for millennia, to thaw. As thawing soils decompose, the carbon dioxide and methane are released into the atmosphere in varying proportions depending on the conditions under which decomposition occurs. Permafrost emissions could contribute significantly to future warming, but the amount of warming depends on how much carbon is released, and whether it is released as carbon dioxide or the more powerful greenhouse gas methane. The nature and rate of these emissions under future climate conditions are highly uncertain. To help address these gaps in knowledge, the Next-Generation Ecosystem Experiments (NGEE) Arctic project is forging a systems approach to predicting carbon cycling in the Arctic, seeking to quantify evolving sources and sinks of carbon dioxide and methane in tundra ecosystems and improve understanding of their influence on future climate.

Since 2012, studies at NGEE Arctic field sites on Alaska’s North Slope and the Seward Peninsula have assessed important factors controlling carbon cycling in high-latitude ecosystems. Measurements taken near Barrow, Alaska revealed emissions of methane and carbon dioxide before spring snow melt that are large enough to offset a significant fraction of the Arctic tundra [1]. Laboratory experiments using permafrost samples from the site showed that as surface ice melts and soils thaw, an immediate pulse of trapped methane and carbon dioxide is released. These processes are not currently captured in Earth system models, presenting an opportunity to further enhance the strength of model projections.

NGEE Arctic is complemented by NASA’s Arctic Boreal Vulnerability Experiment (ABoVE) 2017 airborne campaigns and ongoing fieldwork that provide access to remote sensing products and opportunities for cross-agency partnerships. NASA and DOE scientists are collaborating to improve understanding of how variations in permafrost conditions influence methane emissions across tundra ecosystems. Through ABoVE, NASA researchers are developing new data products to map key surface characteristics that are important in understanding permafrost dynamics, such as the average active layer thickness (the depth of unfrozen ground above the permafrost layer at the end of the growing season) map presented in the figure below. As part of NGEE-Arctic, DOE scientists are conducting field and modeling studies to understand the processes controlling seasonal thawing of permafrost at study sites near Barrow and Nome, Alaska. Use of remote sensing products generated for these sites allows for the extrapolation of the plot measurements to landscape and eventually regional scales, as well as improvement and validation of models (including DOE’s Energy Exascale Earth System Model) of how permafrost dynamics influence methane emissions.

NGEE Arctic is led by DOE’s Oak Ridge National Laboratory and draws on expertise from across DOE National Laboratories and academic, international, and Federal agencies. The project benefits from regional co-location of sites with the DOE Atmospheric Radiation Measurement program, the NSF National Ecological Observatory Network, and NOAA’s Climate Modeling and Diagnostic Laboratory. 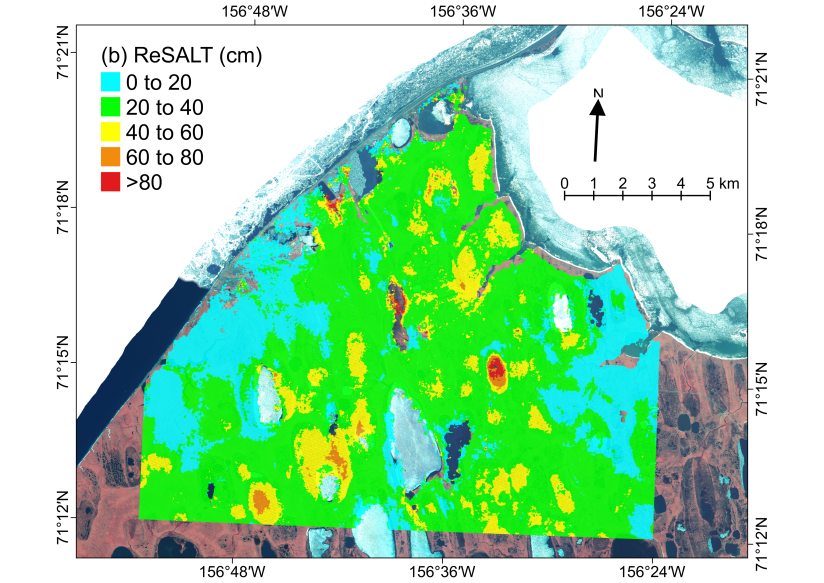 Map shows the average active layer thickness (ALT) at the end of the growing season for the Barrow, Alaska region that contains the NGEE Arctic study site. The active layer is the portion of soil above the layer that thaws and freezes seasonally each year; ALT is an essential climate variable for monitoring permafrost status. Image is based on the analyses of remote sensing Advanced Land Observation Satellite (ALOS) Phased Array type L-band Synthetic Aperture Radar (PALSAR) data from 2006 to 2010. Source: Schaefer et al. 2015. [1]