Monitoring tools help resource managers prepare for and reduce the impacts of .

The impacts of drought on water resources, plants and wildfire, agriculture, and the economy are complex and occur over many timescales, underscoring the of a range of drought monitoring tools that support different types of decisions. To help meet this need, two complementary weekly drought monitoring and mapping tools—the Vegetation Drought Response Index (VegDRI) and the Quick Drought Response Index (QuickDRI)—were developed by the U.S. Geological Survey and the National Drought Center in collaboration with NASA, USDA, and the Center for Advanced Land Management Information Technologies. VegDRI and QuickDRI both integrate satellite-based observations of vegetation and soil conditions, climate data, and other environmental parameters across the contiguous United States. VegDRI, in operation since May 2009, depicts the effects of drought on vegetation at a 1-kilometer spatial resolution over seasonal timescales[1]. VegDRI has been useful for depicting drought in the U.S. Drought Monitor (USDM) especially over croplands, rangelands, pastures, and natural grasslands, and is being used by the National Weather Service as part of their drought assessment reports and by various state-level drought task forces[2]. QuickDRI, which became operational in 2017, is more sensitive to emerging or rapidly changing drought events (or “flash” droughts) that can have devastating impacts on agriculture, natural resources, and the economy. QuickDRI is designed to be especially useful for crop and rangeland assessments, irrigation scheduling, and wildfire management decisions.

These products are consulted each week by the USDM map team as they assemble the national USDM map and summary narrative, which sets the standard for communicating the location and intensity of drought to a broad audience. Weekly national USDM maps are the most widely consulted gauge of drought conditions across the country, used by policy makers, state drought task forces, media, farmers, and ranchers. Since 2012, the USDM has been used to trigger aid tied to the Farm Bill that has supported ranchers and farmers impacted by drought. 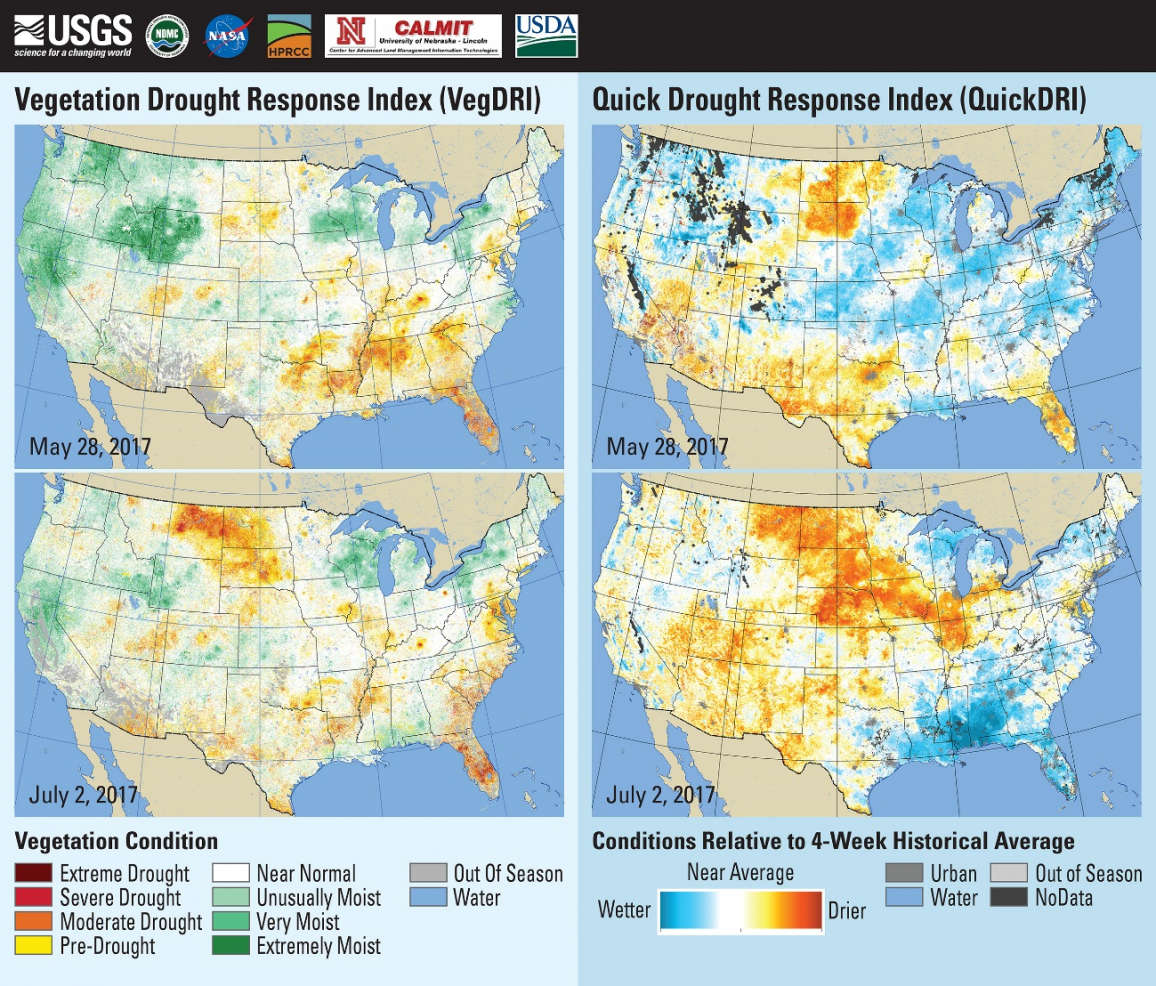 VegDRI (left) and QuickDRI (right) for weeks in May and July depicting the of the “flash” over eastern Montana, North Dakota, and South Dakota in 2017. Note: No Data in QuickDRI occurs where snow cover is present. Source: USGS.

Modeling the impacts of climate variability on agriculture