In February 2016, the World Health Organization declared the Zika outbreak spreading across the Americas since 2015 a Public Health Emergency of International Concern, based on Zika’s previously-unknown association with birth defects. The virus was first discovered in 1947 in Africa and had not previously been found in the Western Hemisphere. By February 2016, the outbreak had spread to 48 countries and territories in the Americas, with virus transmission mainly by the Aedes aegypti mosquito. Transmission was widespread and ongoing in Puerto Rico and occurred also in Florida, Texas, and other U.S. Territories, with the potential for additional outbreaks in the continental United States.

Zika’s spread, like that of other emerging infectious diseases, revealed several uncertainties in the disease’s development and transmission. The ecological and epidemiological factors contributing to its transmission are unclear, but may include some known climatological and environmental factors that affect the development of Aedes aegypti mosquitoes and their ability to transmit pathogens. As part of a broad Federal Zika response, USGCRP member agencies supported investigations of Zika dynamics that aimed to resolve key knowledge gaps and forecast disease spread.

The Ecology and Evolution of Infectious Diseases Program, a joint NSF, National Institutes of Health (NIH), and USDA effort, funded nine Zika rapid-response grants, including studies of environmental drivers and mosquito-climate dynamics. Investigators supported by NASA, NSF, and NIH used a USGS disease-mapping tool and Centers for Disease Control surveillance data to identify U.S. cities at for Zika transmission [1], some of which subsequently experienced outbreaks. NIH’s Fogarty International Center convened a meeting of Federal officials and disease modelers to advance the application of predictive models in outbreak response, and supported intramural and extramural Zika modeling efforts, such as a collaboration with Colombia to forecast Zika dynamics in that country [2].

USGCRP member agencies also contributed to the Zika response by making data and tools publicly available. VectorMap, a product of the Walter Reed Biosystematics Unit based at the Smithsonian Institution, was expanded to monitor the Zika virus hazard on U.S. military bases, drawing on models and NASA data. The Center for Disease Control’s Epidemic Prediction Initiative established a repository of public Zika epidemiological data from multiple U.S. and international sources as a resource for the scientific community engaged in the public health response. 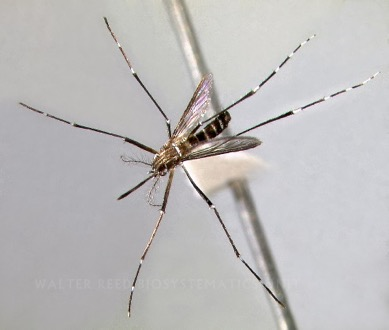 Caption: the Aedes aegypti mosquito is the primary vector for transmission of the Zika virus. The geographic range of Aedes aegypti is influenced by environmental factors that can be used to monitor and predict virus hazard levels. Credit: Walter Reed Biosystematics Unit, Smithsonian Institution.