An assessment of observed and projected climate trends in the United States forms the foundation for comprehensive analyses of climate-related vulnerabilities and risks.

USGCRP oversaw the production of the Climate Science Special Report (CSSR) as Volume I of the Fourth National Climate Assessment. CSSR assesses the state of knowledge on human-caused , with a primary focus on the United States, including observed and future projected changes in temperatures, precipitation patterns, events, sea-level rise, and . CSSR was released in November 2017 and provides the physical science foundation for a consistent assessment of climate-related risks and impacts across regions and sectors of the United States in NCA4 Volume II (Impacts, Risks, and Adaptation in the United States), released in late 2018. CSSR was developed as part of USGCRP’s sustained assessment process, which facilitates ongoing participation of scientists and stakeholders in the integration of knowledge into assessment products and the quadrennial NCA, enabling new information and insights to be assessed as they emerge.

Following a public notice for author nominations, the CSSR Federal steering committee selected 30 scientists from Federal agencies, national laboratories, universities, and the private sector as Lead Authors. Contributing Authors were later chosen to provide input on select areas of the assessment. NOAA served as the administrative lead agency for preparation of the report. CSSR was reviewed multiple times by USGCRP agencies as well as the public and the National Academies of Sciences, Engineering, and Medicine. The report is available at https://science2017.globalchange.gov. 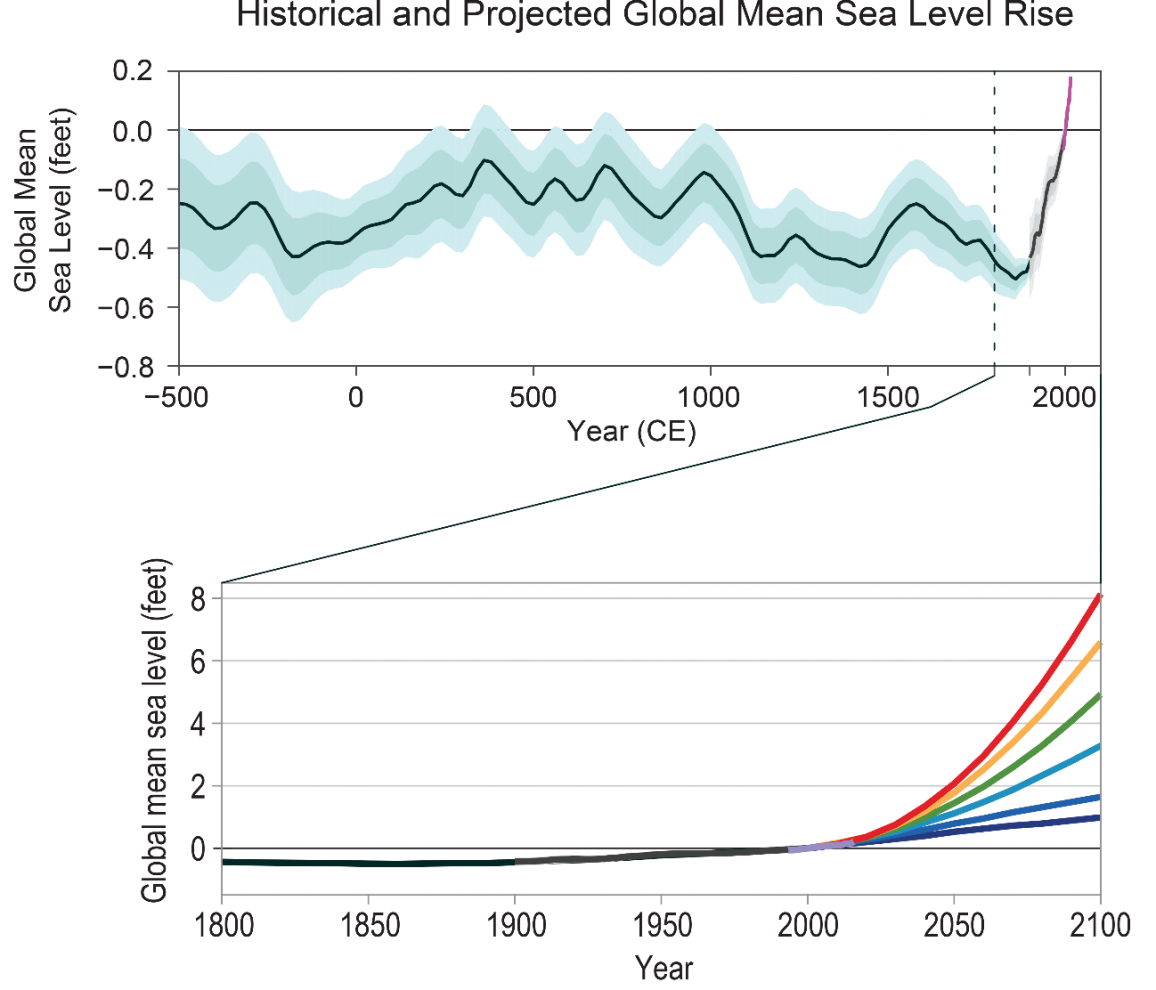 The top panel shows observed and reconstructed global mean (average) sea level for the last 2,500 years. The bottom panel shows projected mean sea level for six future scenarios. The six scenarios—spanning a range designed to inform a variety of decisions—extend from a low , consistent with continuation of the rate of sea level rise over the last quarter century, to an extreme scenario, assuming rapid mass loss from the Antarctic ice sheet. Note that the range on the vertical axis in the bottom graph is approximately ten times greater than in the top graph. Source: Climate Science Special Report Executive Summary, Figure 8, based on Figures 12.2 and 12.4 in Chapter 12 of the full report.