Predicting the future of tropical forests

Field research provides new data advancing our ability to project how tropical forests will respond to a changing climate.

Tropical forests store vast amounts of carbon and play a key role in regulating Earth’s climate. As climate changes, these ecosystems have the potential to become a net contributor to if they shift to releasing more carbon to the atmosphere than they absorb[1]. However, how these forests will be affected by a warming climate and changing atmosphere is still uncertain¾and is critical for improving model projections of future [2]. In the first experiment of its kind, researchers are testing how an intact tropical forest responds to levels of warming expected over this century, including potential feedbacks to global climate. The Tropical Responses to Altered Climate Experiment (TRACE) is a multi-university project funded by a collaboration among the USDA-Forest Service, U.S. Geological Survey, and DOE. TRACE, initiated in September 2016 in El Yunque National Forest, Puerto Rico, is using heaters to warm plants and soils 7o F above surrounding temperatures—consistent with the projected range for the region by 2100. This temperature increase is also used in several higher-latitude warming experiments, enabling improved cross-site comparison of results. Initial measurements demonstrate the experiment’s ability to consistently warm soil at depth to targeted temperatures.

While the 2017 hurricane season dramatically impacted the TRACE site, the project is continuing and will have a unique opportunity to explore how the ecosystem responds to a major natural disturbance. Over the next phase, researchers will measure temperature effects on a wide range of biological processes important to carbon cycling. Results will help reduce the uncertainties surrounding tropical forest responses to increasing temperatures, including whether these ecosystems will become net sources of carbon to the atmosphere rather than carbon sinks. 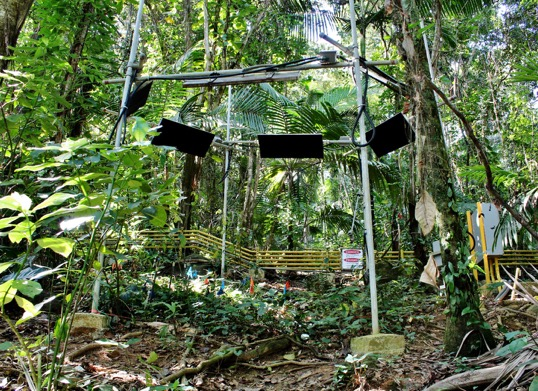