Monitoring recovery of the ozone layer

Interagency collaboration sustains long-term measurements that track the health of the ozone layer.

Ozone gas in the upper atmosphere protects the planet’s surface from harmful solar radiation. The Antarctic ozone hole was discovered in 1985, increasing concerns about human emissions of gases that destroy ozone and the negative consequences for life on Earth. Two years later, the international community signed the Montreal Protocol, an international treaty designed to protect the ozone layer through regulation of ozone-depleting compounds. Later amendments completely phased out production of widely-used chemicals known as chlorofluorocarbons that destroy ozone. As a result of these controls, the ozone layer is expected to recover over the next few decades. The minimum ozone concentration in the Antarctic ozone hole—a good indicator of the overall health of the ozone layer—is higher than it has been since the 1980s, which may be a sign of ozone recovery (see figure).

Since 1990, NASA and NOAA have worked together to monitor global ozone using a series of NASA and NOAA Solar Backscatter Ultraviolet Radiometer (SBUV and SBUV/2) instruments. This program of almost 30 years of sustained effort demonstrates robust cooperation between these two agencies. 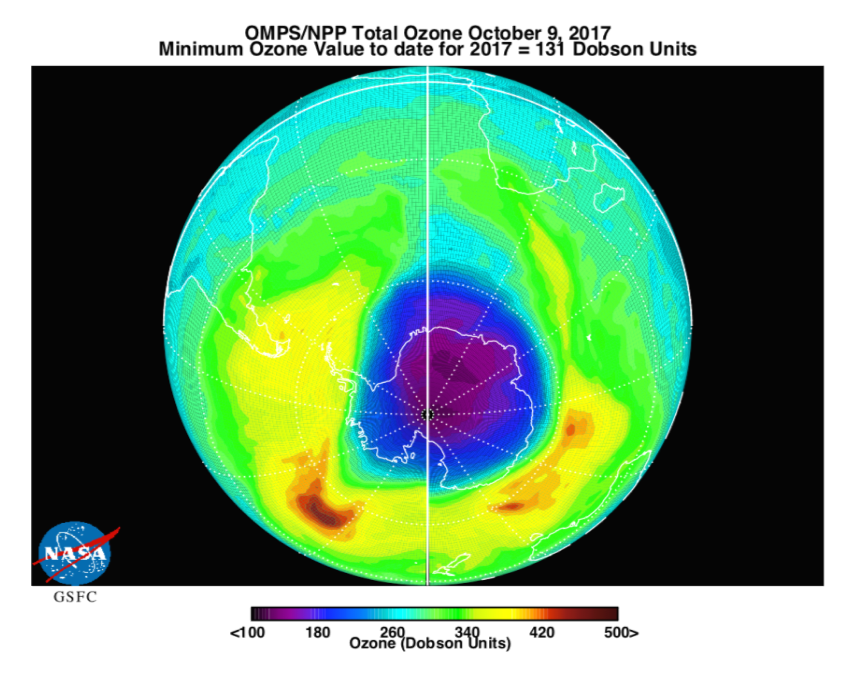 The 2017 annual minimum ozone detection of 131 Dobson Units over Antarctica was observed on October 9, 2017, about a week later than usual, indicating that ozone levels may be starting to recover. Source: NASA.