An observing campaign on the West Antarctic Ice Sheet is improving understanding of influences on recent ice loss and the implications for future sea level rise.

Antarctica holds the largest reservoir of ice on Earth and is significant contributor to sea level rise. The West Antarctic Ice Sheet, once considered relatively stable, has shed an increasing amount of ice into the surrounding ocean in recent years as the climate in the region has warmed rapidly [1] [ 2]. The ice sheet would cause significant sea level rise if it collapses completely, but scientists do not yet understand when or how fast this could occur. To improve understanding of future ice sheet behavior, DOE and NSF launched the Atmospheric Radiation Measurement (ARM) West Antarctic Radiation Experiment (AWARE) in 2015 to collect detailed atmospheric and cloud data in the region over fourteen months. [3]

Much of the West Antarctic Ice Sheet lies below sea level over Antarctic bedrock, its edges flowing into floating ice shelves in the surrounding ocean. While warm ocean waters at the base of these ice shelves are the main driver of recent ice sheet loss, satellite measurements also reveal widespread melting on the ice sheet’s surface that is expected to increase as the atmosphere warms further. Clouds over West Antarctica play a critical role in how much melting occurs because of their influence on how much of the sun’s energy reaches the ice sheet’s surface. One key objective of AWARE is to improve understanding of how clouds in the region, among the least studied on the planet, impact energy flow onto and away from the Earth’s surface. [4]

In November 2015, AWARE deployed equipment to the McMurdo research station at the edge of the Ross Ice Shelf for fourteen months and to the Divide camp on the ice sheet’s interior for forty days in the summer season. A suite of instruments scanned the surface and atmosphere, collecting data on cloud and aerosol properties, water vapor and temperature, and energy flow between the ice sheet’s surface and the atmosphere. These fine-scale measurements complement satellite data that cover large areas over longer time periods, providing insights into details of atmospheric processes needed to improve model estimates of future climate conditions, including the ice sheet’s behavior and its contribution to sea level rise. Measurements recorded during extensive and widespread surface melting in January 2016 (see figure) provided information on the physical mechanisms that drive these melt events, illustrating the important role of large-scale atmospheric factors (including the strong 2015–2016 El Niño event) in producing fluxes in temperature and humidity over West Antarctica, and the resulting impacts on the ice sheet’s surface. [5] 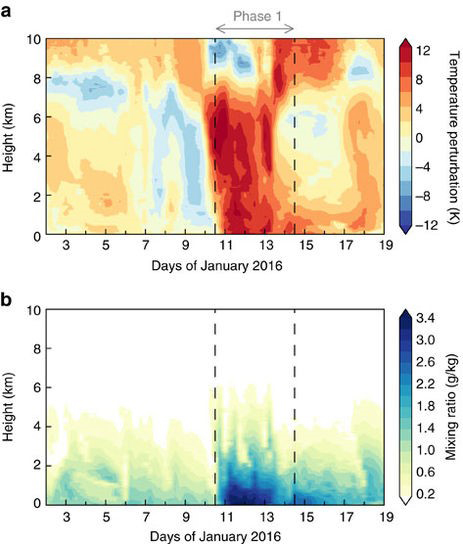 The January 2016 melt event on the West Antarctic ice sheet was captured by satellite and surface observations. (a, b) Vertical profiles of temperature perturbation and water vapor mixing ratio based on 6-hourly AWARE radiosoundings captured large temperature and moisture fluxes associated with pulses of marine air during the melt event. The temperature perturbation is calculated as the difference between the measured temperature and the mean temperature during the period spanning December 2015 to January 2016 (duration of the field campaign). For all vertical profiles, the height is with respect to the ground level (1801 m above sea level). Source: Nicholas et al, 2017.

Assessing the effects of climate change on tropical cyclones