Climate and health assessment information has been shared widely through a number of platforms and formats, including a Spanish translation of the report overview.

In April 2016, the USGCRP released The Impacts of Climate Change on Human Health in the United States: A Scientific Assessment, a groundbreaking report detailing the major risks and vulnerabilities to human health posed by . Since its release, the report has received over 270,000 visits to its website and over 20,000 downloads. Much of this success is the result of outreach efforts by the USGCRP and member agencies over the past year. Over 50 public events communicating the report findings have been held, including sessions at the American Public Health Association's Annual Meeting and the American Geophysical Union Fall Meeting. USGCRP also released a Spanish language version of the report’s Executive Summary.

In addition to engagement and outreach, USGCRP’s member agencies have produced several derivative products to reach broader audiences and help to address the needs of the climate and health community. The National Institutes of Environmental Health Sciences (NIEHS) developed a series of climate and health lesson plans, activities, and guidance materials for high school teachers to promote student discovery and learning about the complex interactions between climate change, the environment, and human health. NIEHS also released the Climate Change and Human Health Literature Portal, which enables users to identify and locate the most relevant peer-reviewed literature, government reports, and other resources from around the globe through an easily searchable, online database. 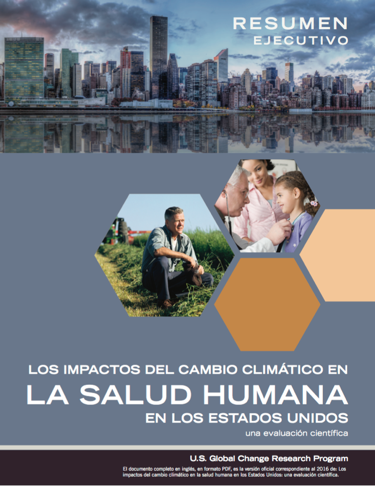 A Spanish language translation of the executive summary of USGCRP’s report The Impacts of Climate Change on Human Health: a Scientific Assessment is now available. Source: USGCRP.