Scientists are using satellites to collect detailed data on forest change in remote parts of Alaska and the Arctic.

Rapid warming in the Arctic and boreal regions of Alaska is affecting boreal forests and tundra ecosystems in a number of ways. Higher temperatures and changes in precipitation have led to a higher incidence of wildfire and increased tree mortality from , insects, and disease. Increases in the length of the growing season and the amount of energy produced by vegetation have also been observed. While tracking how climate changes are affecting vegetation in these vast, remote areas with field data is a challenge, satellite measurements of vegetation density over time can be used to monitor trends of growth and decline and predict the consequences of rapid warming and environmental change in Alaska and the Arctic.

Satellite data collected over the past thirty years show that far northern North America is getting greener. Vegetation density data (1–8-kilometer resolution) from the Advanced Very High Resolution Radiometer (AVHRR) and Moderate Resolution Imaging Spectroradiometer (MODIS) instruments show overall growth (greening) trends in tundra vegetation and dieback (browning) trends in boreal forests, with areas with a greening trend dominating (see figure). NASA research has produced new information products at finer spatial scales that, alongside interagency modeling efforts, provide a more detailed understanding of the underlying causes of these trends and their impacts on such as carbon storage. For North America, finer-scale data collected by the Landsat satellite (30-meter resolution) and by commercial satellites (3–5-meter resolution) confirm the trends observed in the AVHRR and MODIS data and can be used to identify trends for specific vegetation types [1]. These new data products also show that some of the variations in vegetation cover trends are due to changes in lake cover, increases in shrub cover, and degradation of due to warming [2] [3].

Interagency atmospheric modeling studies supported by DOE, USGS, NSF, and NASA have provided further understanding of the drivers and impacts of these trends on the environment. Analyses of surface carbon dioxide measurements from 1986–2006 suggest that in spite of overall browning trends and changes in fire frequency, the boreal forest region stored more carbon than it released to the atmosphere over this time period. Further north, despite an observed greening trend the Arctic region has not contributed to carbon emissions overall, with the increases in carbon uptake from the atmosphere in summer balanced out by increased releases during the fall [4]. 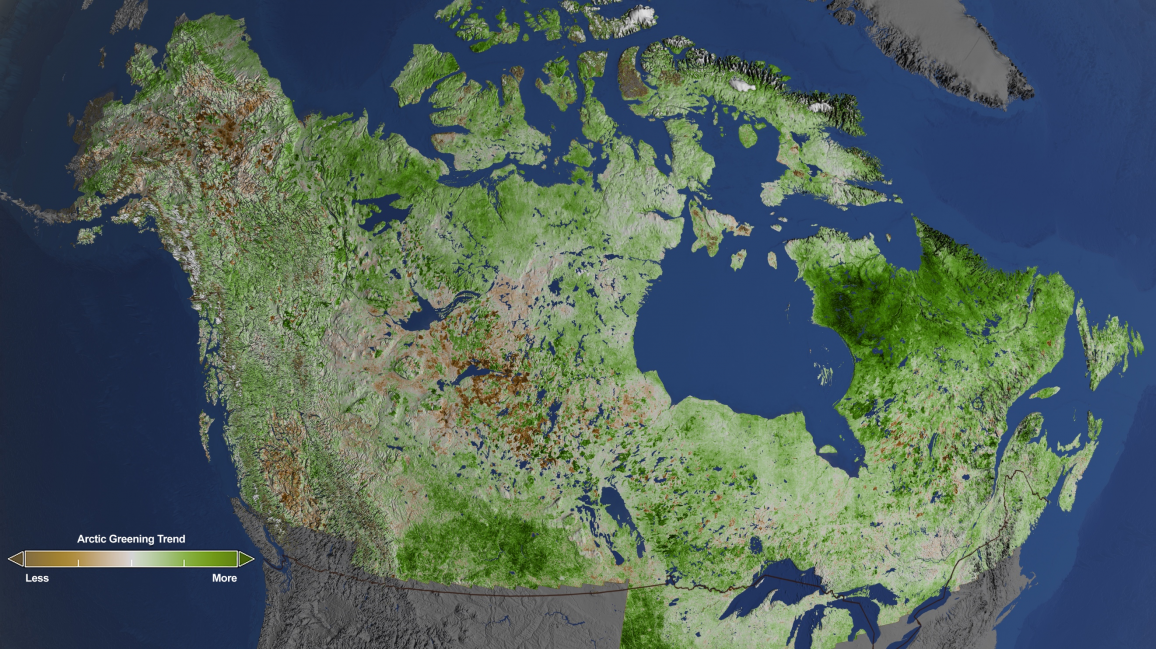 Using 29 years of data from Landsat satellites, researchers at NASA found extensive greening in the vegetation across Alaska and Canada. From 1984–2012, extensive greening occurred in the tundra of Western Alaska, the northern coast of Canada, and the tundra of Quebec and Labrador. Higher resolution Landsat images allow scientists to detect small scale changes occurring across the landscape, including drivers of change for specific vegetation types. Source: NASA's Goddard Space Flight Center/Cindy Starr.

Strengthening critical observations of the tropical ocean and atmosphere