An assessment of carbon stocks in Alaska’s soils and vegetation helped set a baseline for monitoring future change.

Alaska’s soils and vegetation store vast quantities of carbon. Increases in temperature throughout the 21st century may increasingly expose these stores to loss from increased wildfire, permafrost thaw, and other changes that could turn Alaska’s ecosystems into a net source of carbon to the atmosphere. However, much of Alaska has previously not been considered in any major national carbon and greenhouse gas inventory reports, and the potential effects of climate change on carbon storage in the state have not been formally assessed. To help meet this need, a 2016 assessment of carbon stocks and fluxes in Alaska’s ecosystems sought to better understand baseline carbon storage and projected change in response to a rapidly changing environment [1].

Model simulations included in the assessment suggest that carbon storage in terrestrial ecosystems would increase substantially across all climate scenarios studied, and that terrestrial uplands and wetlands are very likely to act as sinks for greenhouse gases from 2010 through 2099. While carbon emissions from wildfire are expected to increase substantially, increased carbon storage driven by increases in ecosystem productivity are expected to compensate for these losses. Overall results suggest that Alaska could be a net absorber of greenhouse gases under some scenarios of future warming, but under others it could be a source, depending on the response of methane emissions of lakes in the state. The future dynamics of methane emissions from lakes were not assessed, and whether or not Alaska is a source or sink or greenhouse gases depends substantially on the magnitude of these emissions. It is likely that Alaska would be a source of greenhouse gases under all climate simulations if these emissions were considered in the assessment. Recently developed models of methane emissions from lakes may be useful in future assessments to more fully inform policy decisions surrounding carbon management in Alaska.

The Alaska assessment was conducted by a scientific team including USGS, USDA Forest Service, and the University of Alaska Fairbanks. It was the first of its kind for the majority of the state, filling large knowledge gaps in carbon baseline distribution. 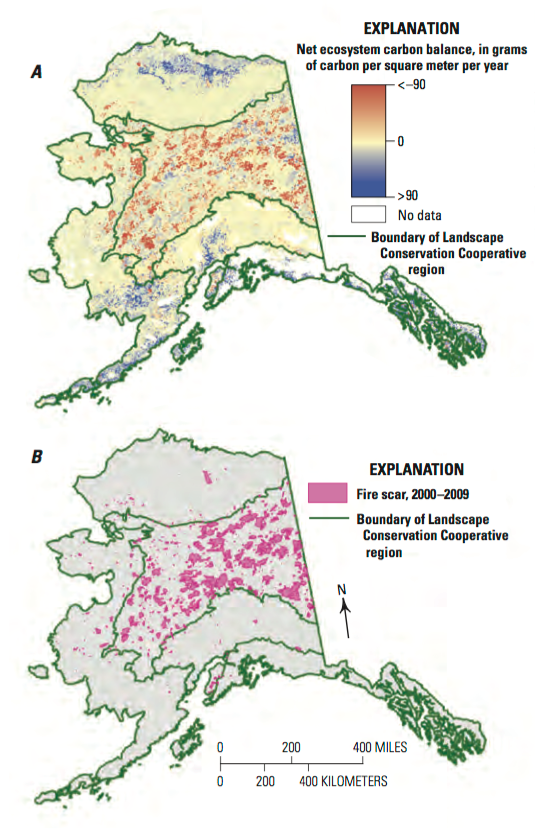 Spatial distribution of A, annual carbon loss and gain across upland Alaska 1950–2009 and B, historical fire scars from 2000–2009 among the five Landscape Conservation Cooperative (LCC) regions. Net ecosystem carbon balance (NECB) is a measure of whether an ecosystem absorbs or releases carbon to the atmosphere, calculated per square meter each year. A positive NECB (blue shades) means an ecosystem stores more carbon than it releases; a negative NECB means it releases more than it stores (red shades). Statewide for the historical period, upland ecosystems were a carbon sink (positive NECB). The Arctic and North Pacific LCCs and southern portions of the Western Alaska LCC were hotspots of high carbon gain (blue shades). Areas that lost carbon in Northwest Boreal LCC North mainly correspond to large historical fire scars (see B, pink). Source: “Baseline and Projected Future Carbon Storage and Greenhouse-Gas Fluxes in Ecosystems of Alaska,” Figure 6.4.