Founded in 2001, the Global Carbon Project (GCP) is an international scientific collaboration investigating the biophysical and human components of the global , the interactions between them, and their response to a changing climate. The GCP tracks sources and sinks of carbon dioxide and methane, the two most important directly emitted by human activities—providing annual updates on emissions trends, atmospheric concentrations, and sources of , in a format accessible to policymakers.

The GCP released its annual update of the Global Carbon Budget (GCB) in December 2015, analyzing emissions trends through 2014. It found that carbon dioxide emissions from fossil-fuel combustion and industrial activity increased by just 0.6% in 2014, in contrast with the rapid growth in emissions in previous years. 2015 emissions are expected to flatten or drop slightly, despite continued economic growth worldwide. Still, 2014 emissions were the highest in human history, and 60% higher than in 1990. Ocean and land carbon sinks removed, respectively, 27% and 37% of the total quantity of carbon dioxide emitted from fossil fuel use and land-use change in 2014.

Because methane has a shorter atmospheric lifetime and stronger warming potential than carbon dioxide on a per unit basis, calculation of the global methane budget is increasingly important for identifying potential climate-change pathways, particularly in the short term. The GCP released a review draft of the Second Global Methane Budget (GMB) in July 2016, estimating that for the period 2000-2012, human activities accounted for about 60% of global methane emissions. Overall, uncertainties relating to emissions from natural sources—particularly wetlands and inland waters—were found to be higher than those from human sources. Improving methane observations at local-to-regional scales is one opportunity to reduce uncertainties in estimates of the total methane budget in the near future.

The GCB and GMB rely on observational data from many sources, with contributions from USGCRP agencies including NOAA, NASA, DOE, and NSF. USGCRP further contributes to the GCP through annual funding for the international programs that partner with the international research platform Future Earth. The U.S. Carbon Cycle Science Program Office, run through USGCRP, is an affiliated office of the GCP. 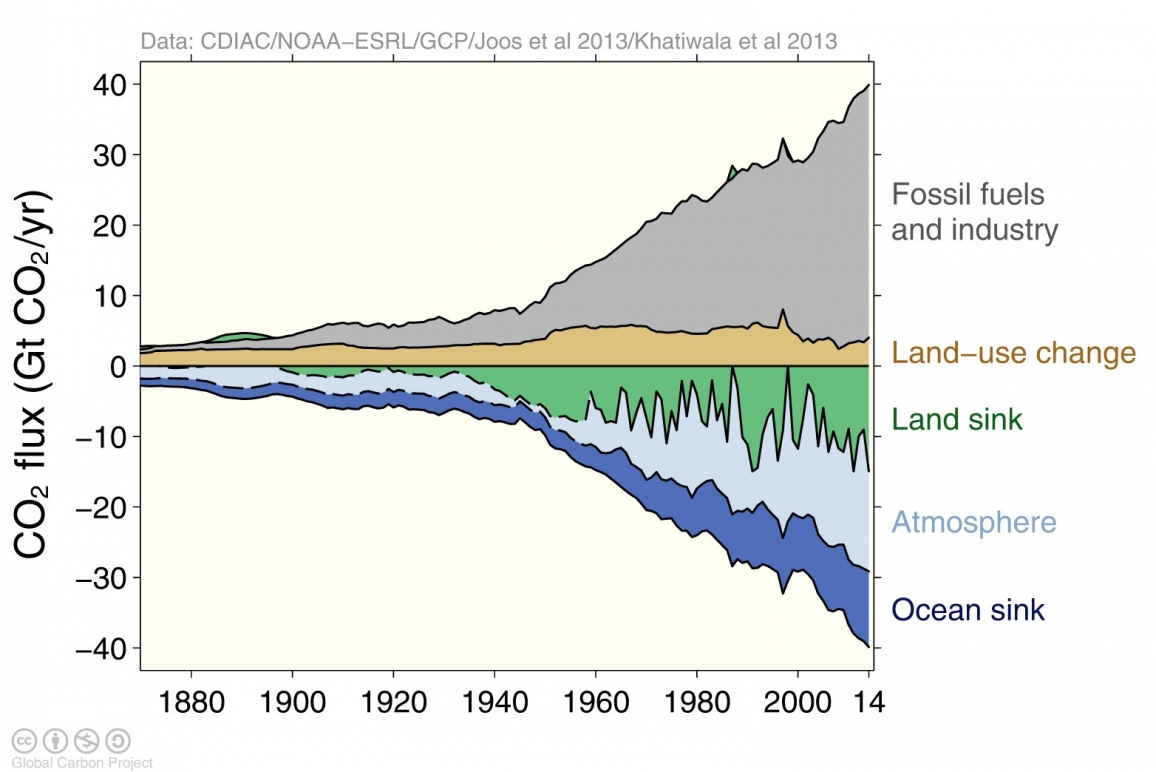 An accounting of global carbon dioxide sources and sinks, from 1870-2014. Carbon dioxide emissions from fossil fuels, industry, and land-use change are taken up by terrestrial ecosystems, the oceans, and the atmosphere. Increasing atmospheric carbon dioxide concentrations, in turn, are driving . (Source: Global Carbon Project.)