Northern peatlands contain vast organic carbon stocks in danger of release into the atmosphere as greenhouse gases as the climate warms, leading to a positive-feedback cycle of further warming and carbon release. Through field experiments in a Minnesota peat bog, DOE’s Oak Ridge National Laboratory, the USDA Forest Service (USDA-FS), and EPA are collaborating alongside university partners to test how peatland ecosystems respond to conditions that simulate the atmosphere of the future, and improve the ability to predict the release of stored carbon and its impact on climate warming. The Spruce and Peatland Responses Under Climatic and Environmental Change (SPRUCE) experiment is measuring changes in peatland biogeochemical cycles over ten years in the USDA-FS’s Marcell Experimental Forest, using a DOE-designed facility for exposing forest plots to elevated temperatures and carbon dioxide levels and offering a look at below-ground activity where most of the ecosystem’s carbon is stored.

DOE scientists are focused on how 10,000 years of accumulated carbon stored in the ecosystem responds to warming, particularly how likely it is for accumulated carbon to be released into the atmosphere as carbon dioxide and methane. USDA-FS scientists and colleagues are leading efforts to understand the effects of warming on wetland hydrology and the cycling of mercury, while EPA researchers are developing models to better understand how warming affects decomposition processes in the ecosystem. Results will help reveal the mechanics of peatland response to climate change, how quickly carbon might be released, and what that means for the ecosystem and for future climate change. 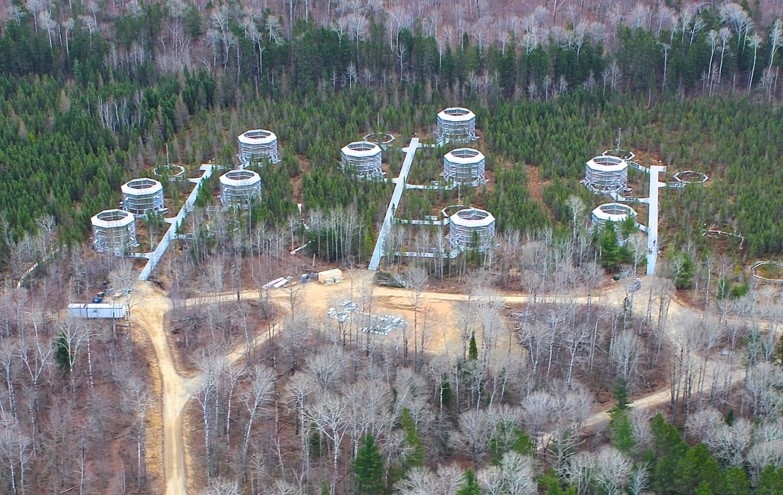