The oceans have absorbed almost all of the excess heat generated by increasing atmospheric greenhouse gas concentrations and a large fraction of anthropogenic carbon dioxide, with profound implications for ecosystems and the climate system. Ship-based hydrographic surveys are the only current means for simultaneously measuring physical, biological, and biogeochemical properties of the global oceans from the surface to the seafloor and are a crucial resource for understanding ocean change and its role in the climate system. Building on global hydrographic surveys underway since the 1970s, the Global Ocean Ship-Based Hydrographic Investigations Program (GO-SHIP)—an international effort established in 2007 and funded by NSF and NOAA in the United States—samples selected hydrographic sections each decade. In combination with efforts from previous decades, data emerging from GO-SHIP reveals profound warming in deep ocean waters around the globe. In a warming climate, the global ocean is a major reservoir for excess heat and carbon dioxide generated by human activities—both vital components in understanding how much and how quickly the atmosphere will warm. New data show that the oceans have taken up the majority of anthropogenic heat in the Earth system in recent decades, with approximately 19% of this heat found below 2,000 meters, and the most intense warming in the Southern Ocean. The ocean is also acting as a major carbon sink: from 1994-2010, approximately 27% of carbon released by the burning of fossil fuels and land-use change was taken up by the oceans, acidifying the upper layers.

GO-SHIP builds on two decades of research under the World Ocean Circulation Experiment (WOCE) and the CLImate VARiability and Predictability (CLIVAR) programs and is a component of the Global Climate Observing System (GCOS) and the Global Ocean Observing System (GOOS). Together, these efforts have led to major scientific advances in understanding of the roles of the ocean in climate change, carbon cycling, and biogeochemical responses to climate change. These findings demonstrate the value of continuous time-series measurements and their ability to provide insights into why and how critical Earth systems are changing over time. 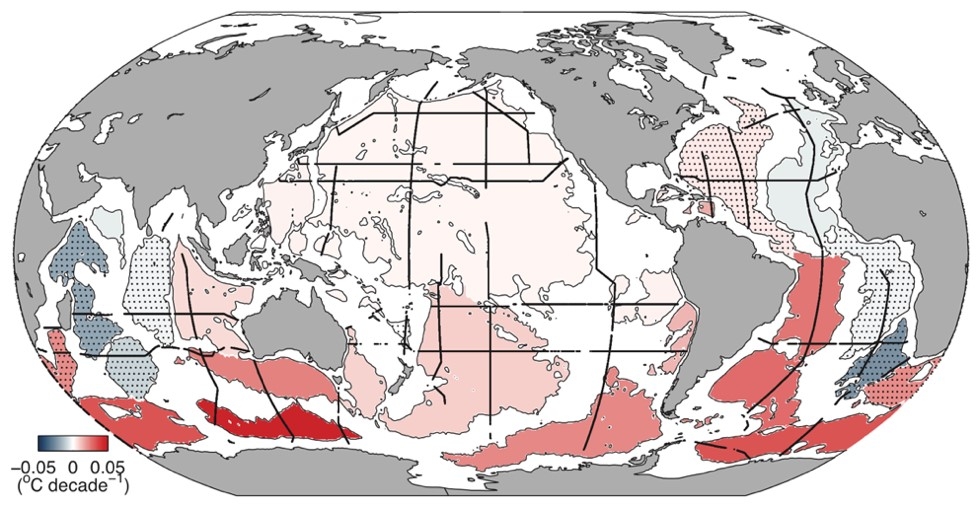 Multi-decadal ship-based surveys show that the ocean is taking up most of Earth’s excess anthropogenic heat, with the deep ocean warming as well as the surface layers. The figure shows average warming rates (◦C per decade) below 4,000 meters (color bar) estimated for deep ocean basins (thin gray outlines), centered on 1992–2005. Stippling indicates that warming rates in a given area are not significantly different from zero at 95% confidence—i.e., it is very unlikely that significant warming or cooling occurred in that basin over 1992-2005. The positions of the repeat surveys from which these warming rates are estimated are also shown (thick black lines) (Source: Talley et al, 2016, using data from Purkey and Johnson 2010).