The Global Change Information System (GCIS) was launched in May 2014 as a repository of global-change data that could be easily and efficiently accessed, integrated with other data sets, and maintained and expanded over time. GCIS initially supported traceable data and metadata for findings and graphics in the Third National Climate Assessment (NCA3) and expanded considerably in support of the 2016 assessment The Impacts of Climate Change on Human Health in the United States (Highlight 15).

From the 2014 release of NCA3 to September 2016, the number of authors catalogued in GCIS (which include report authors as well as those contributing to input references) expanded from 1,141 to 9,500, and the number of datasets from 23 to 3,133. These inter-linked resources provide traceability and transparency of Federal global-change assessments, tools, and data, allowing users to discover authors and organizations who produced a figure within a report, trace the datasets used to produce the figure, and learn about who produced the data. In addition to providing traceability of global-change assessments and tools, efforts are underway to demonstrate how the GCIS can support the charge of the President’s Climate Action Plan by facilitating an integration of the Climate Data Initiative with other Federal initiatives. 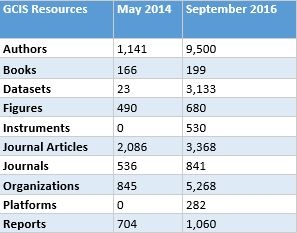