In 2015, drought impacts in the Western United States cost an estimated $4.5 billion. Impacts included the fallowing of hundreds of thousands of acres of farmland, excess groundwater pumping, and the exacerbation of wildfire conditions, which contributed to fires that caused the highest annual total of U.S. acreage burned since record-keeping began in 1960. As these impacts become more prevalent under a changing climate, preparedness, including an early-warning system for drought conditions, is increasingly important in many parts of the United States. The National Integrated Drought Information System (NIDIS) has an interagency mandate to create a nationwide Drought Early Warning System (DEWS) by integrating and coordinating efforts to research, monitor, predict, prepare for, and mitigate drought conditions. The goal of the DEWS is to make climate and drought science easily understandable, usable, and readily available to decision makers and improve the capacity of stakeholders to cope with the impacts of drought.

NIDIS has taken a regional approach to building a national system. Since 2007, NIDIS and its interagency partners have established regional DEWS in the Upper Colorado River Basin, Southern Plains states, the Apalachicola-Chattahoochee-Flint River Basin states, the Missouri River Basin, the coastal Carolinas, and California/Nevada. In February 2016, NIDIS and its partners launched new regional DEWS in the Pacific Northwest and the Midwest.

NIDIS works together with representatives and agencies of the USDA, EPA, Bureau of Reclamation, NASA, DOE, Army Corps of Engineers, USGS, FEMA, NOAA, state natural resource and water departments, state climatologists, tribal representatives, and stakeholders from the private sector. In addition, the National Drought Resilience Partnership, a group of seven Federal agencies spearheaded by USDA and NOAA, was established to enhance access to Federal drought resources to help communities better prepare for drought and reduce its impacts on families and businesses. 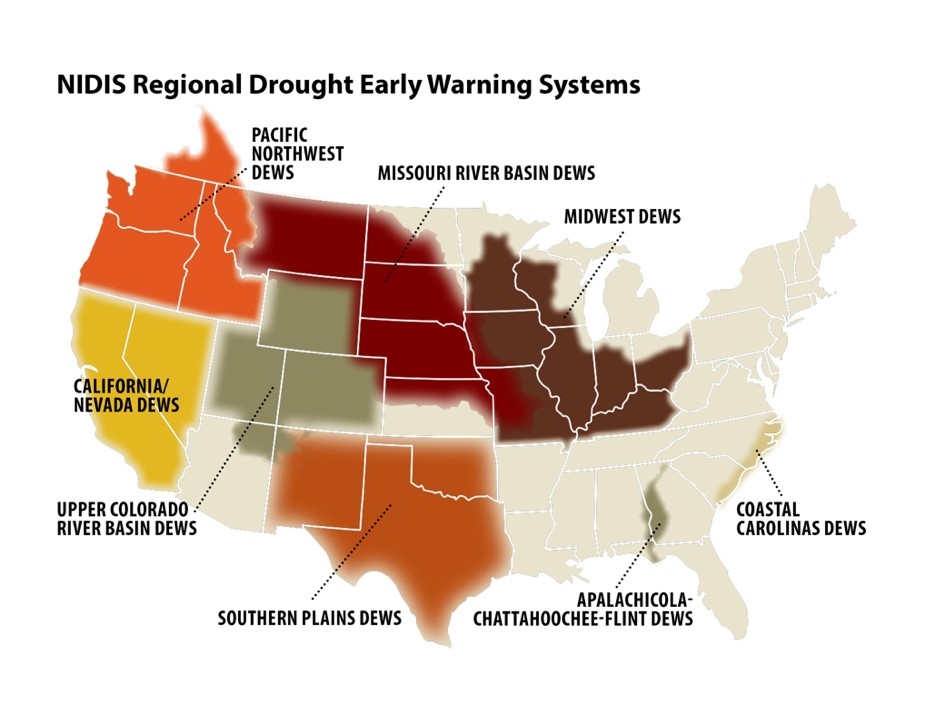