The Record-Setting Early Spring of 2012

In 2012, spring came earlier for the contiguous United States than in any year since 1900, according to recent research by a team of scientists with the USA National Phenology Network (USA-NPN). This research used the USA-NPN suite of “spring indices”—or algorithms based on the accumulated warmth needed to initiate growth in temperature-sensitive plants, which are validated by nationwide historical observations of lilac and honeysuckle growth. USA-NPN is sponsored by multiple Federal entities affiliated with USGCRP—including NSF, NASA, NOAA, DOE’s Oak Ridge National Laboratory, and DOI’s National Park Service (NPS), U.S. Fish and Wildlife Service (FWS), and USGS—in addition to academic and non-governmental organizations (NGOs).

Satellite measurements of vegetation “greenness” show that the cumulative effects of the unusually early 2012 spring were most pronounced across the Corn Belt, the western Great Lakes region, and the northeastern United States. The potential benefits of the early start to the growing season were reversed by late frosts in April, producing a so-called “false spring” that damaged fruit trees across the Upper Midwest and Great Lakes regions.

USA-NPN’s research demonstrates the need for sustained monitoring to identify emerging environmental changes that might be missed without a long-term data record. Other long-term datasets covering different geographical ranges—such as the Northern Hemisphere and the western United States—have documented advances in the start of spring in response to increased temperatures. Coupled with satellite observations of vegetation growth, indicators like the spring indices will become increasingly important for determining how climate change may affect seasonal patterns, and for tracking related impacts on ecosystems, natural resources, and the agricultural sector. 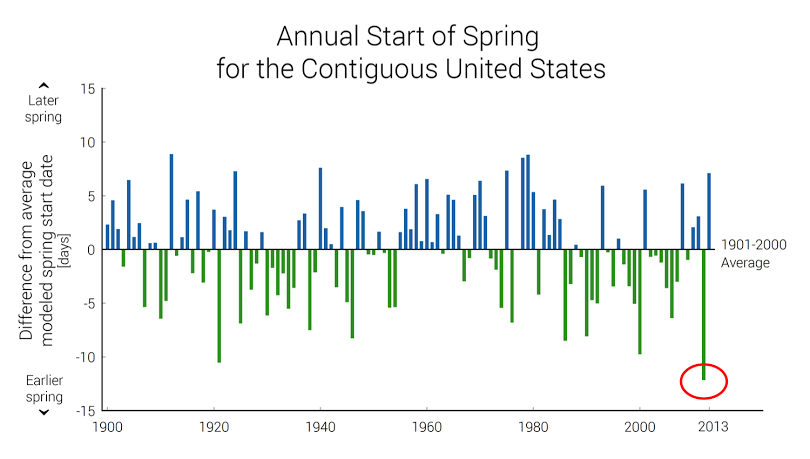 This graph shows the number of days by which the start of spring in each year differs from the average start of spring during the 20th century. The spring of 2012 (circled) set a record for earliest start. (Source: Adapted from the USGCRP indicators pilot, with data from USA-NPN and NOAA NCDC)