The severe, sustained affecting the Central Valley of California has caused a shortage of water for irrigation and crop production. The effect of this shortage is most immediately evident as an increase in the extent of fallowed farmland (or land taken out of agricultural production), which in turn serves as a proxy for socioeconomic impacts. Decision makers can use information about fallowed land to better understand the severity of drought impacts and to support requests for USDA drought disaster designations or emergency proclamations. USDA designations can trigger eligibility for low-interest loans and debt set-aside programs.

However, currently there is no comprehensive, systematic measurement of fallowed land to support within-season decision making. To address this need, NASA, the National Integrated Drought Information System (NIDIS)/NOAA, and the USGS WaterSMART Program funded a study to test the feasibility of using satellite imagery to map fallowed areas rapidly. The study, which was described in the April 2014 NIDIS Newsletter, was carried out by a team of researchers from NASA Ames Research Center/California State University Monterey Bay, the USDA National Agricultural Statistics Service, USGS, and the California Department of Water Resources.

The study showed that satellite-based mapping can provide datasets on fallowed acreage six months sooner (in July of the current year instead of in January of the following year). Furthermore, the historical context for these datasets can be extended back-ward through 2001 by applying an automated cropland classification algorithm to monthly imagery from the satellite-borne NASA MODIS instrument. Finally, the study demonstrated the capacity to provide early-season estimates of potentially fallowed acreage as far in advance as mid-April of the current year, and to provide monthly updates from April through November. The early-season estimates, with historical context, provide information in time for the California Department of Water Resources to adjust plans for water transfers, and for state and Federal agencies to anticipate disaster requests (see also Highlight 12). These results point the way to the establishment of an ongoing service for monitoring fallowed land, which will be put in place over the next three years. 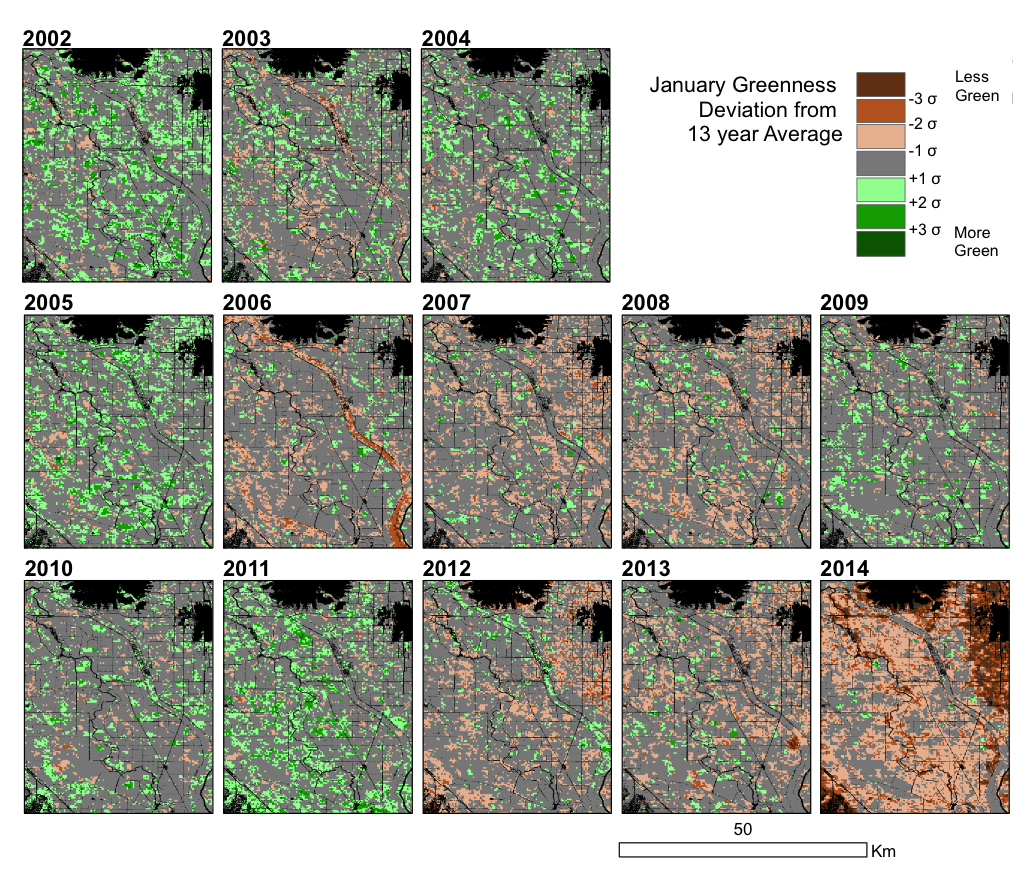 The greenness of croplands in January is shown relative to the 13-year average from NASA MODIS records. Satellite imagery can be a powerful tool for understanding the impacts of on agricultural lands. (Source: NIDIS Newsletter, April 2014)

Strengthening critical observations of the tropical ocean and atmosphere