Drought is a significant hazard for the United States, with potentially severe and long-lasting impacts on the Nation’s economy and food and water supplies. USGCRP agencies are advancing our understanding of the causes and consequences of drought, an FY 2015 interagency research priority (see Section 4). They are also collaborating in efforts to support drought preparedness and recovery, such as the National Drought Resilience Partnership (a deliverable of the President’s Climate Action Plan) and the National Integrated Drought Information System (NIDIS). NIDIS is a partnership among several Federal entities (including USGCRP agencies DOE, DOI, DOT, NASA, DOC, NSF, HHS, EPA, USACE, and USDA) and academic research institutions that focuses on improving drought monitoring, understanding, and prediction. A recent report produced by NIDIS and the NOAA Drought Task Force analyzed the 2012 drought in the central Great Plains—a drought that continued to impact the U.S. economy into 2014—and identified improvements that could be made to enhance our national prediction capabilities going forward. To learn more, visit: http://go.usa.gov/8pKW

An interagency research effort that is currently advancing U.S. drought prediction capabilities is the North American Multi Model Ensemble (NMME), led by NOAA in partnership with DOE, NSF, NASA, and U.S. and Canadian research institutions. The NMME coordinates models from across major national modeling centers to generate near-term climate predictions. This approach harnesses the unique capabilities of each individual model to produce a cumulative climate prediction that is, as a whole, more accurate than what an individual model could produce. Although the NMME was developed as a research experiment, its demonstrated prediction capabilities are improving our ability to forecast climate conditions—including drought—anywhere from months to seasons in advance. To learn more, visit: http://go.usa.gov/8pKd 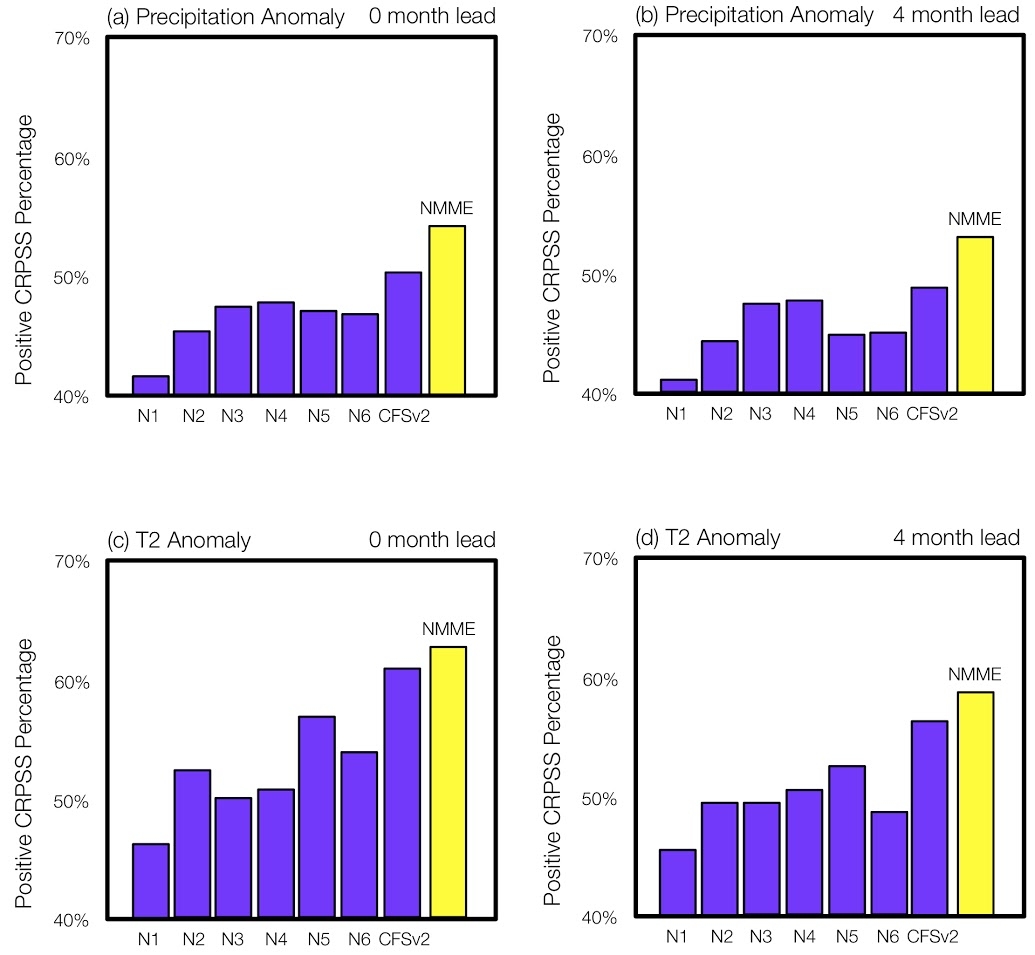 The NMME (yellow column) is a seasonal forecasting system that combines individual models (purple columns N1-N6) to produce more accurate predictions of climate. In forecasts of precipitation (top two panels) and temperature (bottom two panels)—key factors for predicting drought—the NMME performs better than any of the individual models. The NMME's better performance is indicated by the height of the bars, which show performance relative to a reference forecast. (Credit: Adapted from results by E. Wood, Princeton University)